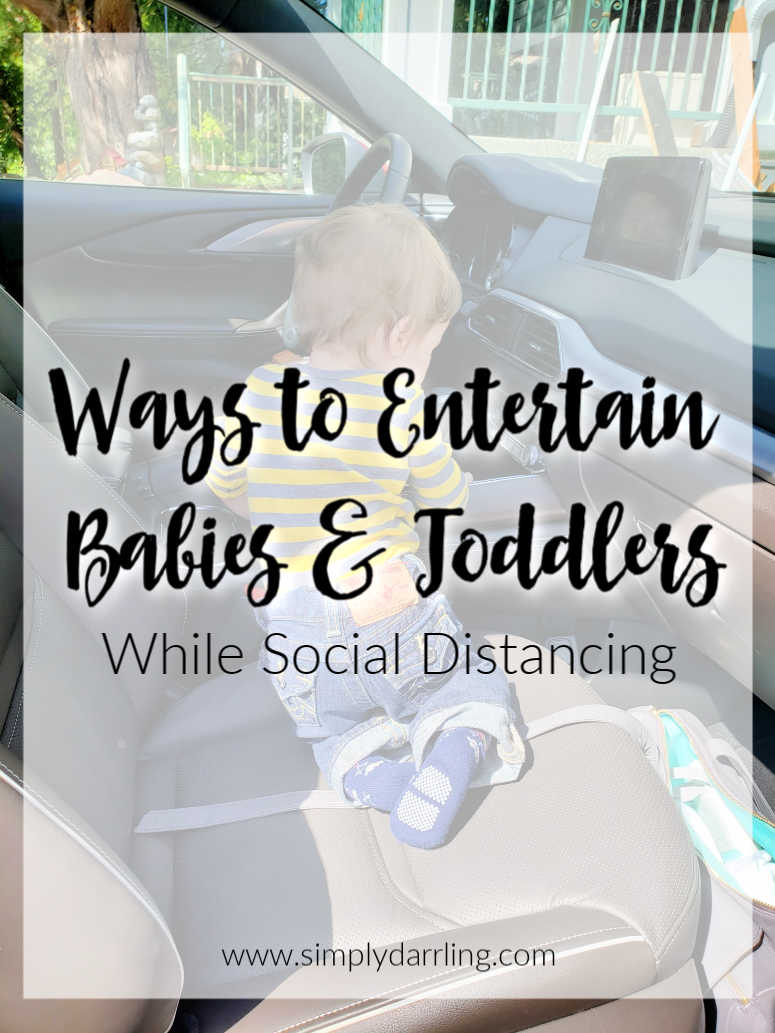 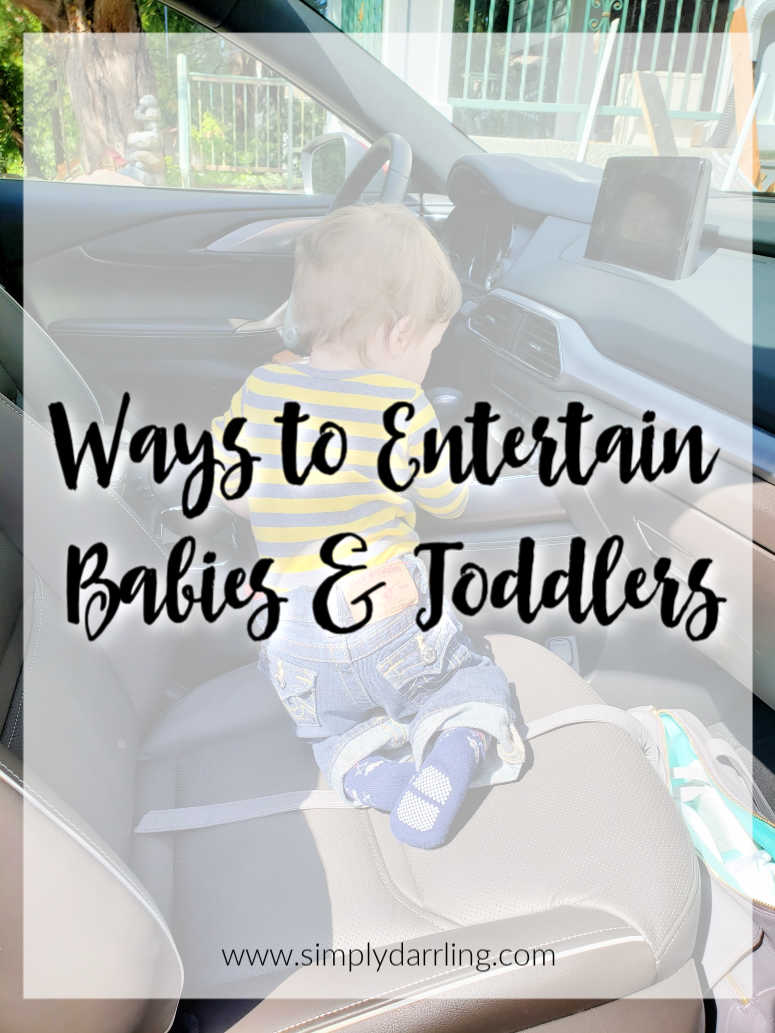 We were provided with a Mazda CX-9 to facilitate this post. All opinions are my own.

The past two months have been….interesting. At the end of February, I was in New Jersey watching the number of COVID cases increase back at home in Seattle. I was watching large conferences cancel and wondering if I would still be heading to California the next week for a conference. By the time I landed in Seattle on Friday evening, the conference had been canceled for the following week. That week, I was told to work from home for the remainder of the month and figured that by early April I’d be back in the office.

As we’re now in May, I’ve quit making predictions on when I’ll actually be back in the office full time. Brad and I have been juggling entertaining Emmett while we both attempt to keep up with work, so we have had some creative solutions to keeping him happy.

Brad already worked from home a couple days a week with Emmett; however, before COVID, they would often visit clients together. We have partitioned off a bit of his home office for Emmett. It is full of toys, and he will often enjoy his morning bottle while playing in the office. For younger babies, a MamaRoo or swing is a great option for a few moments of entertainment.

A pack-n-play is also a great way to contain small kids with toys in the work area.

I might have gone a bit crazy ordering items for different sensory activities recently. My dad built Emmett a learning tower a couple weeks ago, and it has quickly become an essential item in the kitchen to keep Emmett entertained while we get meals ready, do the dishes, or make my morning coffee. 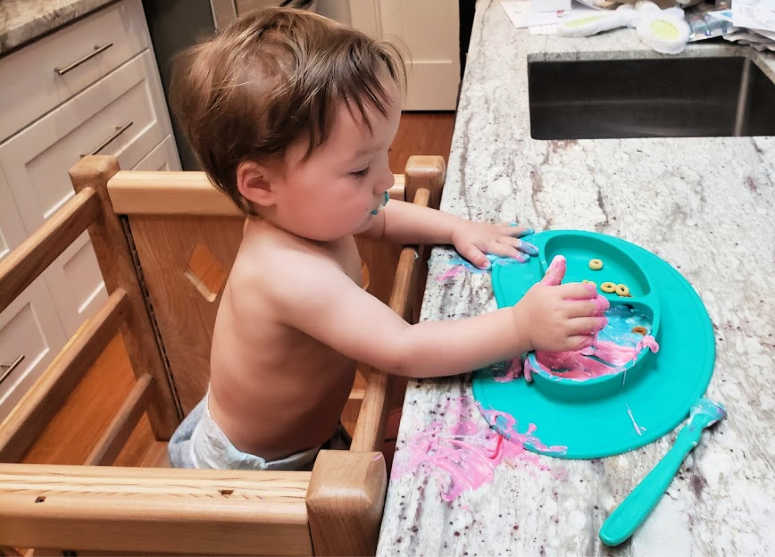 I stirred one drop of food coloring into some of Emmett’s yogurt and put it in a bowl in front of him while he was in the learning tower. Emmett went to town smashing the yogurt, eating the yogurt, and generally making a giant mess. The dogs LOVED this project because they got the droppings.

Once Emmett was over playing with the yogurt (let’s be honest, it lasted all of like 10 minutes), he went straight into the bath because he was covered basically from head to toe in colorful yogurt. For slightly older kids, hopefully you would get more than 10 minutes of entertainment. 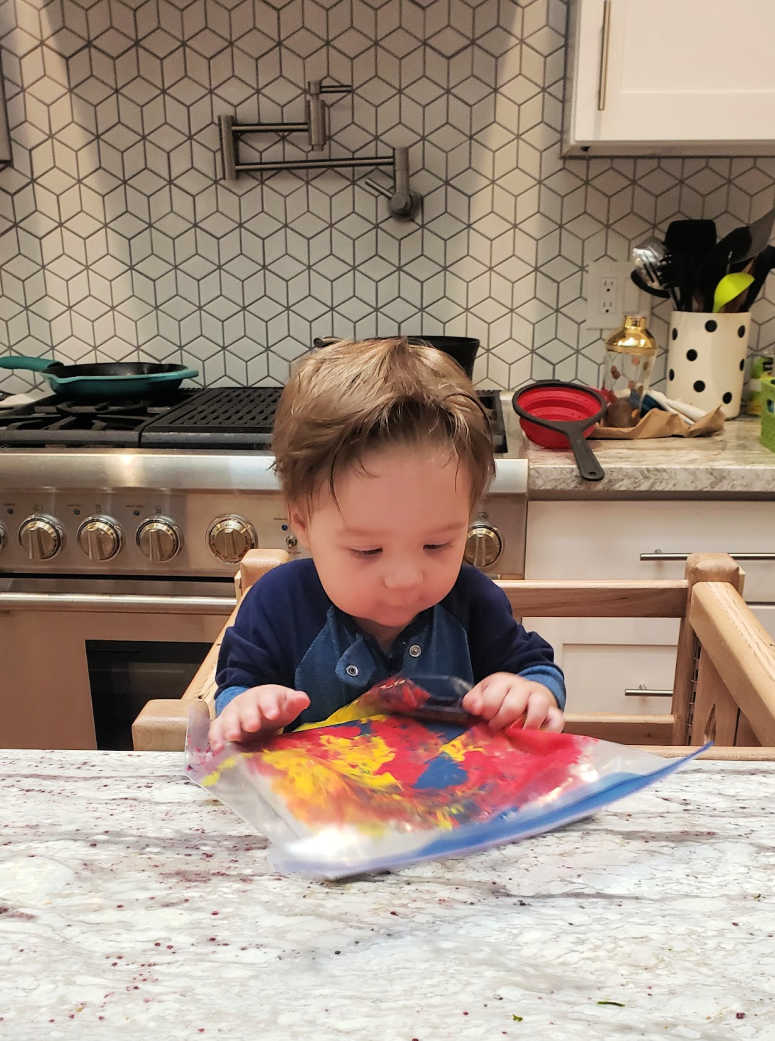 Emmett’s first art project! Originally, I was going to do this project in the garage with it taped to the floor, and well, got optimistic that he would keep the bag on the counter. I was wrong. I spent half the time picking the bag off the floor. Fortunately, all the mess stayed sealed in the bag, and they quickly dried in the sunshine.

This project is simply a small canvas with a few drops of paint and then placed in a sealed bag. Emmett pushed the paint around on the canvas to make his artwork. 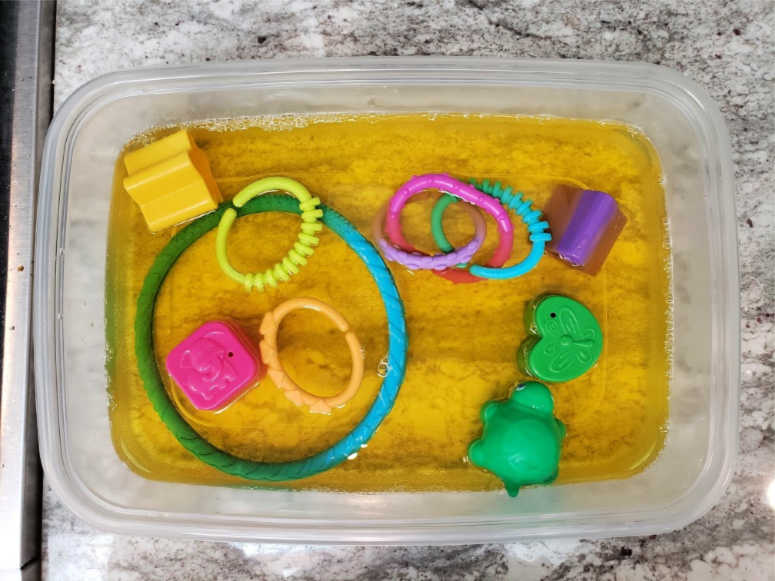 This one does take a bit more setup time since the Jell-o needs time to set in the fridge. The basic idea is to bury toys in Jell-o and then let them dig out the toys. I’ve had this one sitting in the fridge for a few days, but he hasn’t gotten the chance to dig into the gelatin fun quite yet.

Pom-Poms in a Whisk

This activity is pretty much as it sounds. Put some pom-poms in a whisk and let them pull the pom-poms out. And repeat.

Go for a Drive 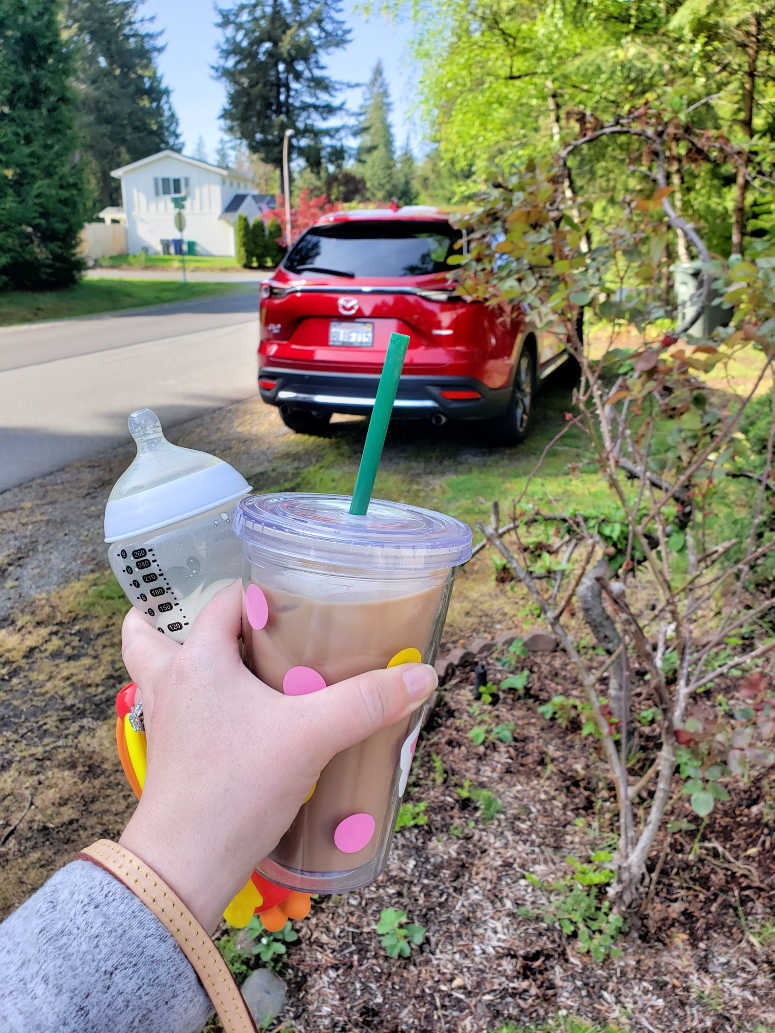 Emmett’s nap length during all this has been a crapshoot. Some days we’ve gotten up to a two hour nap, but a lot of days they have been in the 30-45 minute range. This uncertainty makes it hard to really dig into a project since we have no idea if there is enough time to complete it before he wakes up.

There is one way to basically guarantee that he does take a nap and that is to go for a drive (preferably at freeway speeds). So a couple times a week we pack him into the car and head out with no destination in mind. Emmett gets some down-time (and most likely a good nap), and we get out of the house while still maintaining distance from others.

Last week, we got the chance to drive around the Mazda CX-9 and it was an awesome vehicle for our socially distanced drives.

It may seem like a small thing, but the built-in sunshades in the second row are awesome for kids. It was so easy to simply raise the shade when we installed the car seat, and Emmett was set for the week. 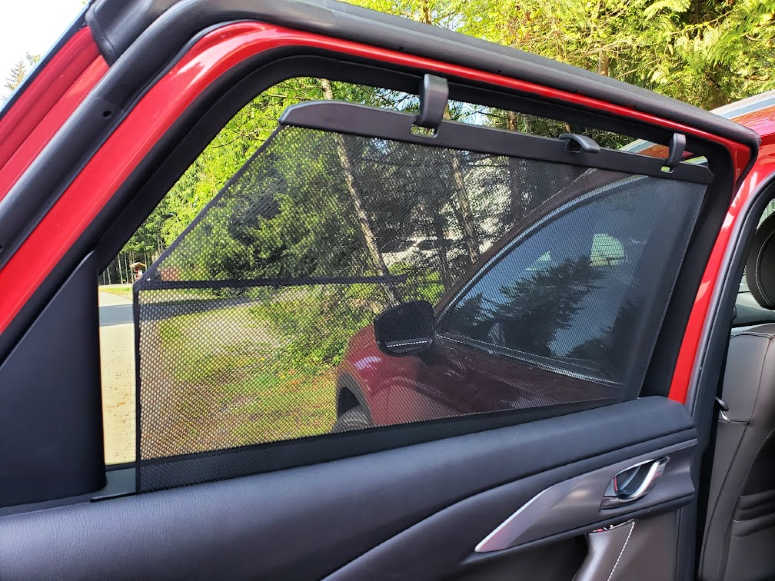 In addition to heated front seats, they are also ventilated which is ideal for warmer months or climates. Throughout the week, I utilized both the heating and cooling option and I absolutely loved having these features.

The Active Driving Display projects onto the windshield in front of the driver. It offers information such as the current speed (and speed limit) along with other safety information. The display has sign reading capabilities, so if there is a temporary speed limit, it will update the display with the correct limit.

The rear-view and 360* camera available on the Mazda CX-9 is pretty awesome as well. Make sure you really *do* clear that garbage can next to you, and that there are no surprises while getting into or out of parking spaces. 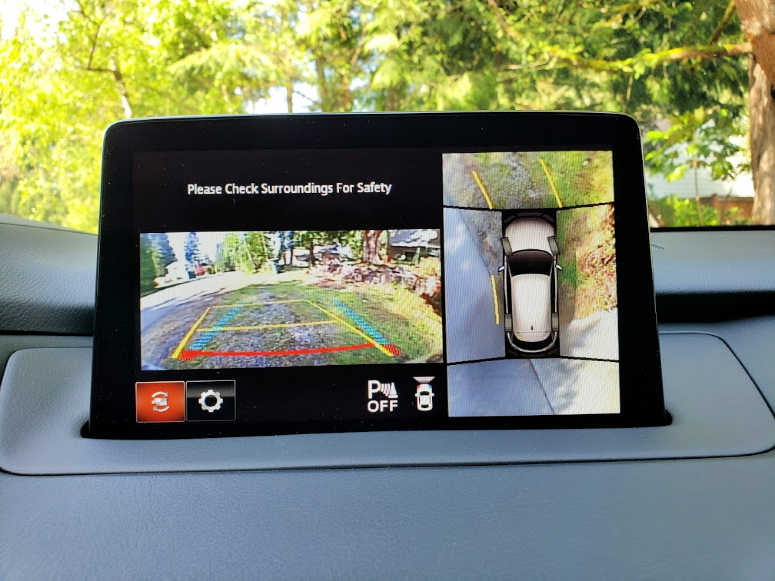 We were driving around the Signature trim level of the Mazda CX-9 which features seating for 6 passengers. The console between the two seats in the second row featured USB outlets, heated seat controls, and of course cup holders.

While Brad got Emmett’s car seat installed, Emmett had some time hanging out in the front seat and trying to press every button possible. Fortunately the car was off so he couldn’t actually make any changes. 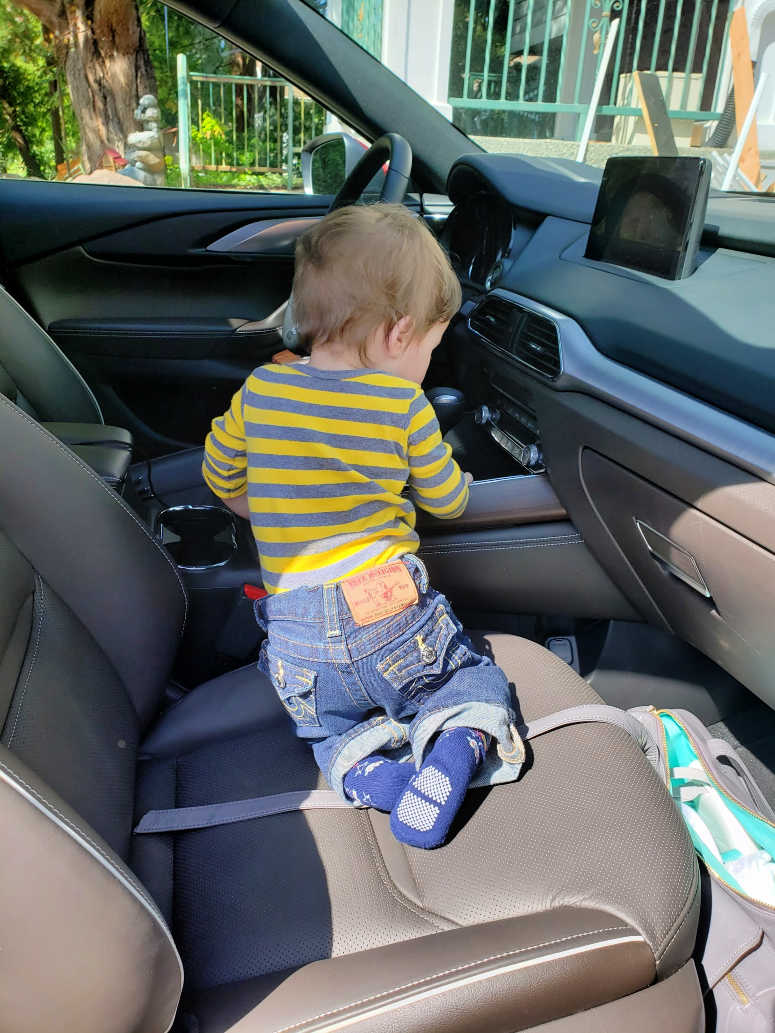 While we have definitely been driving less over the past couple of months, it was fun getting out on the empty road and experiencing all the fun features of the Mazda CX-9. 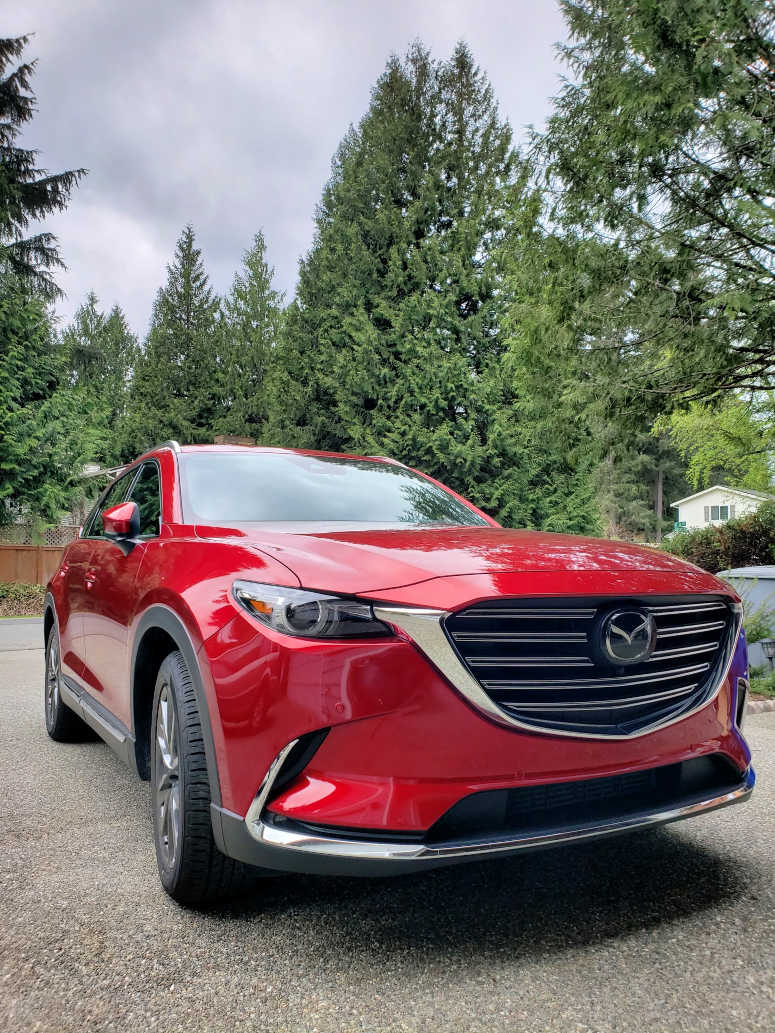