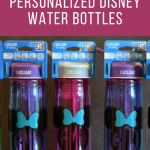 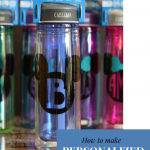 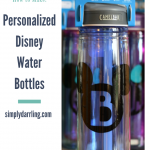 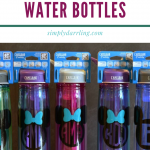 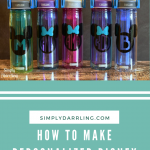 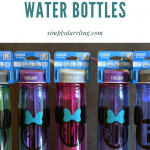 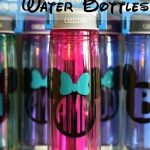 I originally made these personalized Disney water bottles for a trip to Walt Disney World with Brittnee, Michael, and Aubree. As we were making preparations for the trip, we decided that custom water bottles were an essential item.

These Disney water bottles have traveled with Brad and me on multiple trips since I made them and they are always one of the first items that I grab when packing the park bag. We started out with the Insulated Camelbak Eddy water bottle. The insulated option was definitely worth it, we filled it with ice water in the morning and it definitely stayed cold with minimal sweating.

I purchased the Mickey Ears and Minnie Bow shapes of Etsy, I probably could have found free shapes if I searched hard enough but after a few minutes of searching I decided to go with convenience.

Next it is time pull out my Silhouette Cameo.

The ears and bow are going to be two separate shapes, place both shapes in your work space and size the bow so that it is proportional with the head. At this stage, I like to work a lot bigger than what the final product will be. Don’t worry about the bow’s position as it will be moved later anyways. Once the bow and ears are proportional, make them into a single group and then size them down to the desired size. Ungroup the bow from the ears and pull the bow to the side of the work space. For my monogram, I used the Circle Monogram from Font Brothers, the initial bottles use Lemondrop. Once you have the letters on the workspace, fill them with a color (doesn’t matter which color, its just for visibility). To cut, use “Cut Edge” and verify that the monogram/initial is being cut out before sending to the machine. I haven’t forgotten the bow, it is off to the side for a reason. You will want the ears and bow to be different colors so they need to be cut at separate times. Once the ears have all been cut out, move them off to the side and put the bows into the workspace to cut them out.

Make sure to use Permanent Vinyl for this project. Technically it is dishwasher safe, but I will probably still hand wash them.

Use transfer tape to move the ears to the waterbottle then repeat with the bow. The water bottles turned out to be essential throughout the trip. We were easily able to refill them from drinking fountains throughout the parks. We even found a few restaurants that had fountain drinks in the dining area so we could put some ice water in them after our meal. All the restaurants (and refreshment kiosks) would also give us cups of ice when we asked. Aren’t they adroable? We had a few people ask us about where we bought them and it was fun to say that we made them ourselves :)