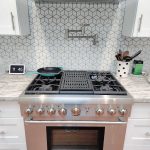 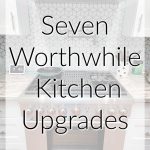 Kitchen remodels can be overwhelming, especially when it comes to the budget. Scrolling Pinterest will give you lots of ideas from budget buys to luxury items, but how do you know which kitchen remodel upgrades are worth the cost?

The answer to this question is custom to each homeowner; however, I’ve compiled a list of the kitchen remodel upgrades that I’m glad we included in our remodel a couple years ago.

If you’re already going to be opening up the walls and making any changes to the water lines, adding a pot filler above the stove is an easy addition. Pot fillers come in a variety of styles that are sure to match your kitchen aesthetic.

The pot filler itself will run about $200, any additional cost may come from your contractor or plumber for installation.

This one took some convincing on my part because Brad thought it was unnecessary. In our previous home we had a microwave above the stove with a built-in fan. For this remodel I went with a 36″ stove and a traditional hood. That meant that either the microwave needed to go onto the counter, or into the island.

I didn’t want to waste any counter space with the microwave, so into the island it was! My dad recommended we look into microwave drawers because they pop out from the island and you can load/unload them from the top rather than bending down.

The microwave drawer has been a great decision for our kitchen. They heat from the top rather than the sides so you can actually fill the entire drawer with dishes.

I didn’t realize how much I like soft close cabinets until I visited somebody without them and kept accidentally slamming the doors and drawers. For some cabinet manufactures, soft close hinges and glides are an upgrade.

We went with some Ready To Assemble (RTA) cabinets that come in standard multiples of 3″ cabinet widths and fortunately the soft close drawers and doors came standard. If you go with the RTA route for your kitchen remodel, see if you can pay to have them assembled before you pick-up because it will save you lots of time.

After your kitchen remodel you might discover that you live in the kitchen differently than expected. If the kitchen is large enough to utilize a bar sink, add in a garbage disposal because it might become more utilized than originally planned.

Our kitchen sink isn’t necessarily out of the way from the stove, but the bar sink is directly behind it so it becomes the easiest spot to drain pasta. It is also significantly closer to my coffee bar when it is time to refill the espresso machine water tank.

This is a relatively “cheap” remodel upgrade. Even if you aren’t moving outlets, they can easily be swapped in to existing locations. There are different options for the USB, such as USB-A, USB-C, or combinations of both.

We installed two USB Outlets in our kitchen – one in the island, and other in a corner of the cabinets. This gives us plenty of locations options for charging our phones and other devices.

This upgrade is actually really inexpensive in the grand scheme of a kitchen remodel, but it is something I use daily (especially as a mom with bottles and sippy cups).

When we first were working on this remodel, I saw an ad for a cup rinser that used pressure to quickly rinse. Unfortunately, the kickstarter had just finished and it wouldn’t be ready for mass market during our remodel timeframe.

Brad surprised me with it for Christmas this year, and it was actually quite easy to install, despite not having the recommended soap-dispenser hole to reuse. We used a tile bit with his drill and it was installed in probably about 15 minutes.

I have used it daily for rinsing bottles before and after washing, it saves a bunch of time (and water)!

At our previous home, the kitchen cabinets ended about a foot below the ceiling height. This awkward gap drove me crazy so when we were measuring for cabinets on this kitchen remodel, I wanted to ensure that they went all the way to the ceiling (with some crown moulding included).

What upgrades would you want to include in your own kitchen remodel?