This post is in collaboration with Kennedy Space Center. All opinions are my own.

In 2003 I visited Orlando with my family. We were in town to visit my cousin and her triplets, but while there we also did some touristy things. One of the places that we visited was Kennedy Space Center. Surprisingly, I don’t remember much about that visit (other than getting a 3-D puzzle of the space shuttle and a nerdy t-shirt about rocket science (which I contemplated buying again on this visit when I saw it in the gift shop).

When we started planning our most recent visit to Orlando with Kevin and Renee, I knew that I wanted to add a day at Kennedy Space Center to the itinerary. 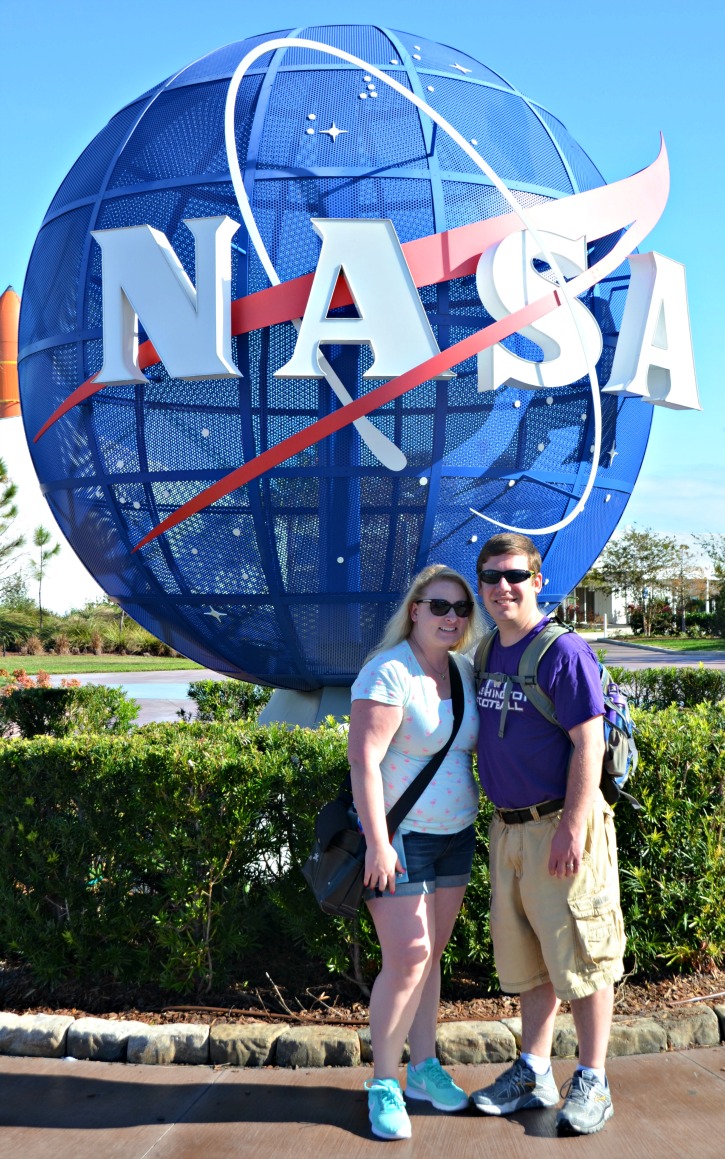 We started the day in the Journey To Mars exhibit. It was awesome to see how the Mars rover has evolved and grown over the years. There were some great hands-on exhibits which Jaxson (and the adults) enjoyed. 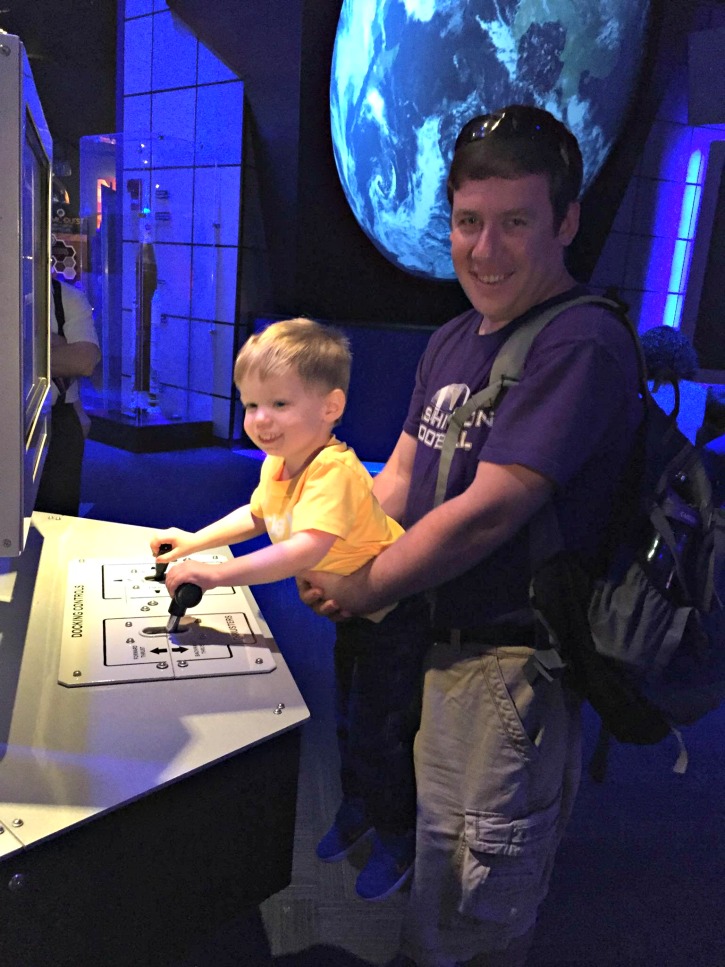 The Kennedy Space Center Bus Tour is included with admission and I highly recommend taking advantage of it. The tour is roughly 2 hours; but the total time is really dependent on how long you spend exploring the Apollo/Saturn V center. The buses leave every 15 minutes so you can really head out on this tour at any point in the day. 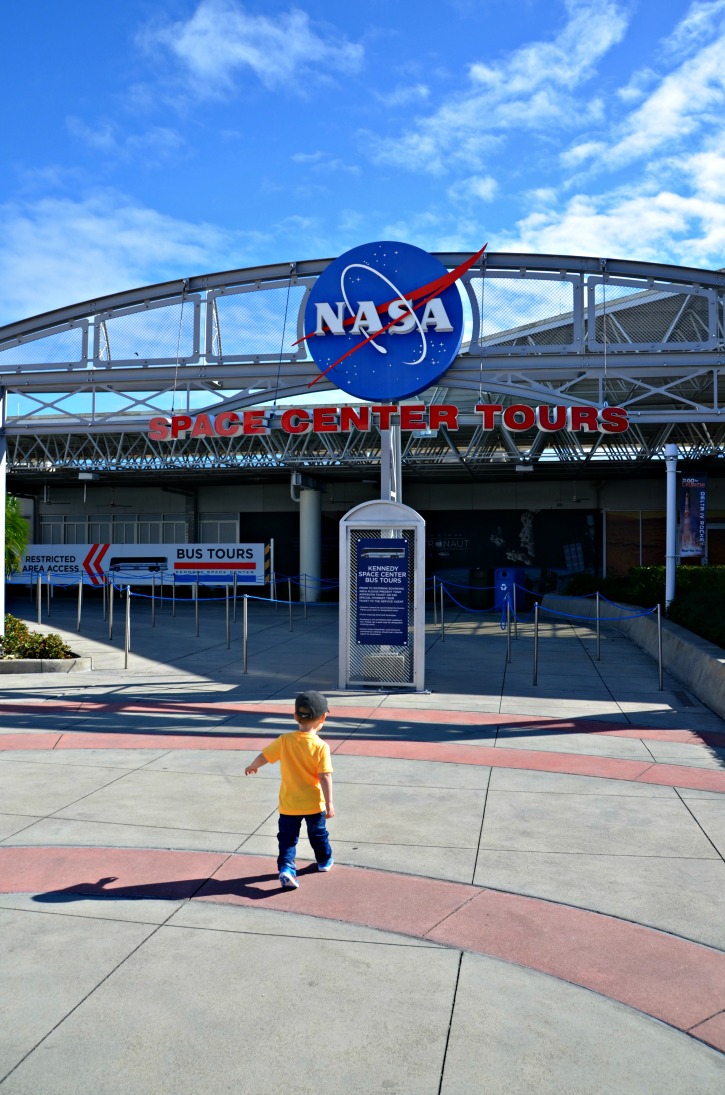 The first part of the Apollo/Saturn V Center is to experience the Apollo 8 launch. Voices and lights emerge from mission control as we see all the systems go through their checks and finally the launch. These are the actual mission control desks that were used. 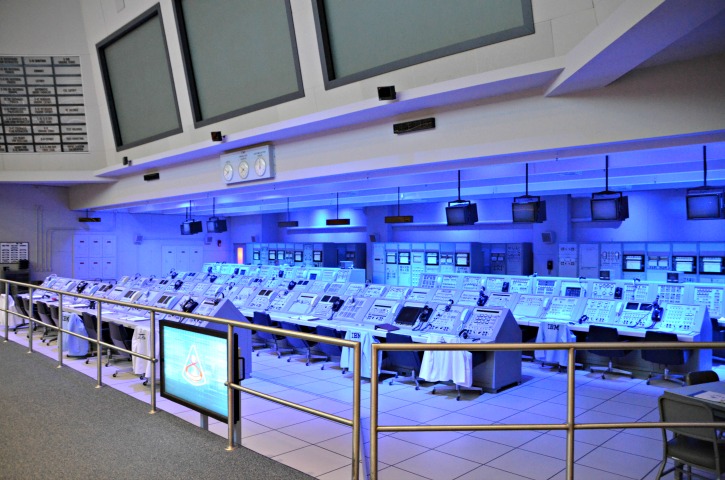 After experiencing the launch, you head into the main center where they have so much more to explore. The Saturn V rocket is hanging from the ceiling, broken up into separate pieces so you can learn about each individual piece of the rocket. 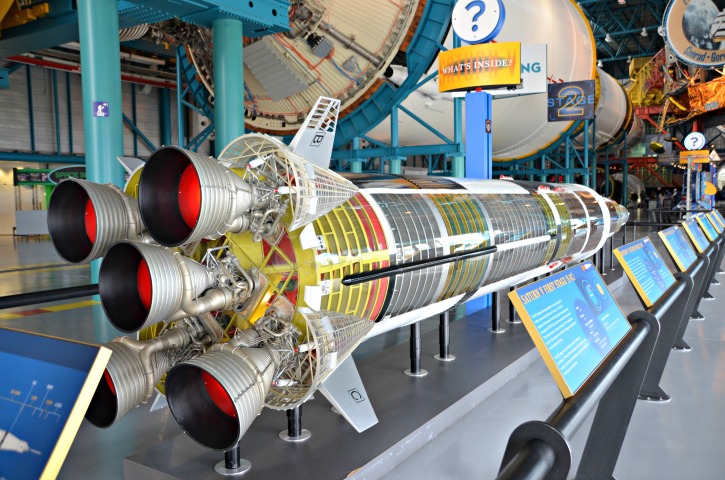 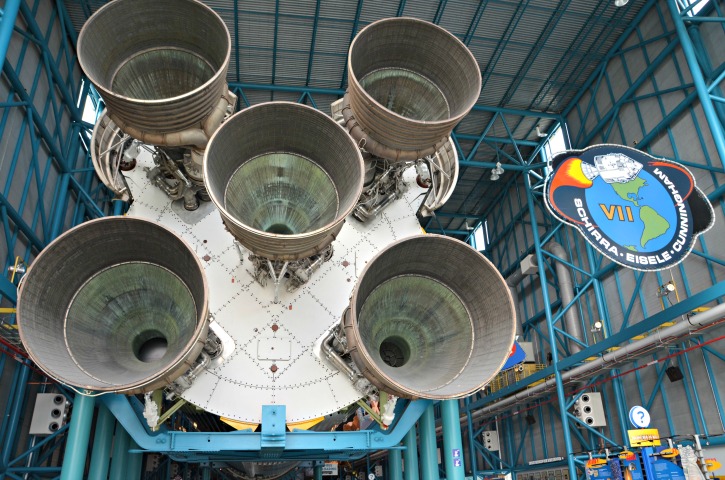 There are also a lot of historical artifacts at the Apollo/Saturn V Center, including the Apollo 14 Command Module (seen below). I also got to touch a moon rock (how many people can say they have touched the moon)?!? 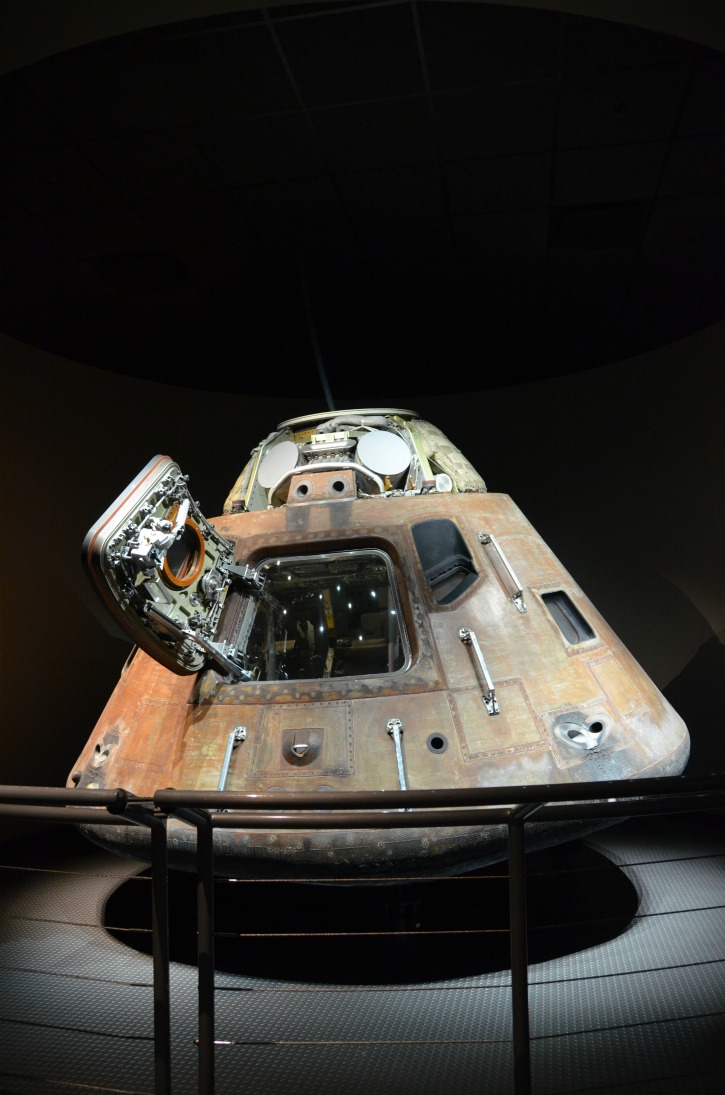 My favorite exhibit was Atlantis. Brad and I saw the final Atlantis STS-135 launch in 2011 and it was awesome to see this orbiter up close. 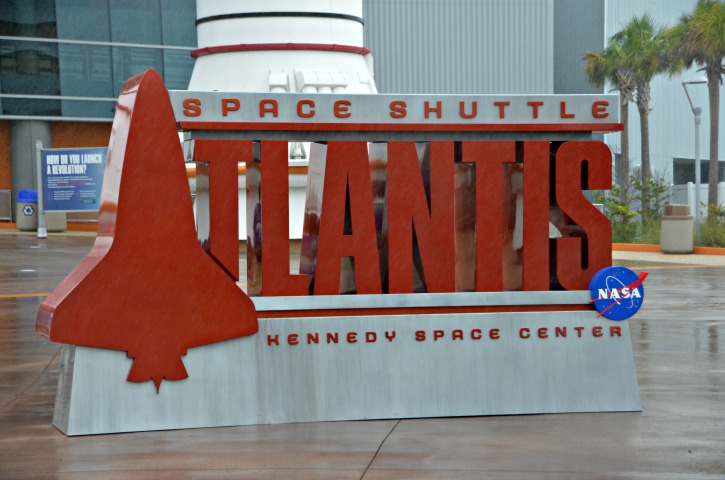 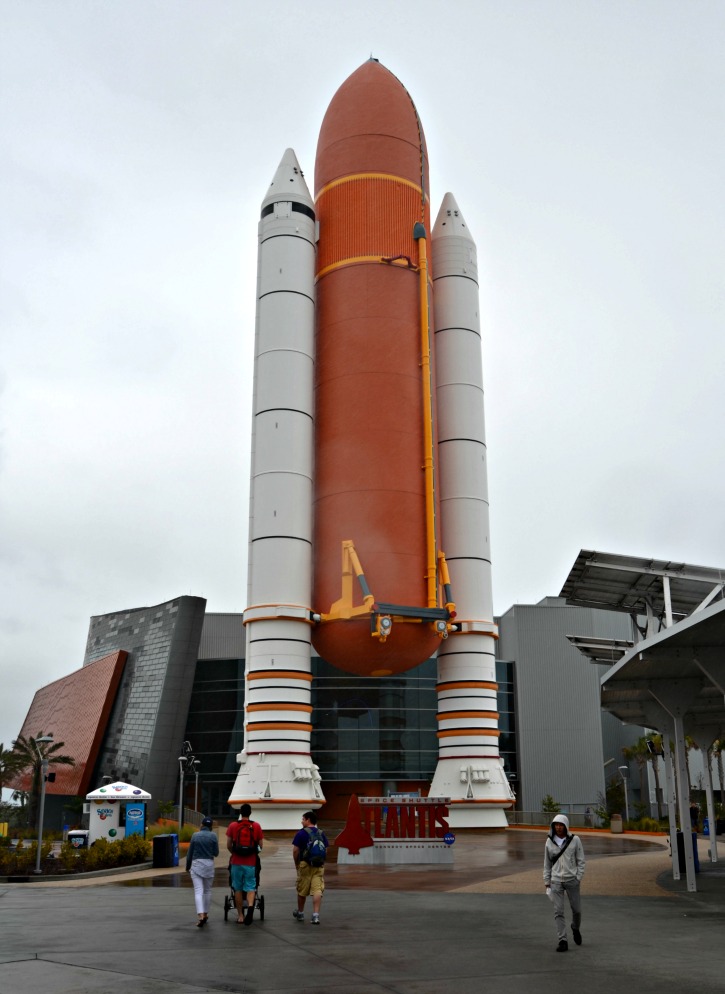 To enter the Atlantis exhibit, there are a couple theaters with mini-movies that play before you get into the exhibit. The final theater projects all around you, and at the end the Atlantis orbiter appears through the screen and then it opens up for you to experience. 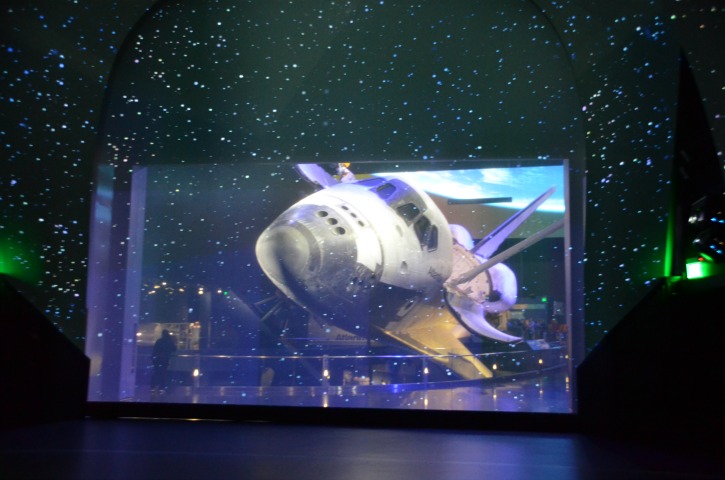 The Atlantis exhibit is 2 stories, you enter in on the second floor and learn about what Atlantis did in orbit. The first floor is more about the shuttle mission on land. There are multiple ways to get between the 1st and 2nd stories – including a giant slide that emulates the landing of Atlantis. I totally went down the slide to get downstairs (unfortunately Brad didn’t get the camera out in time so I don’t have a photo). 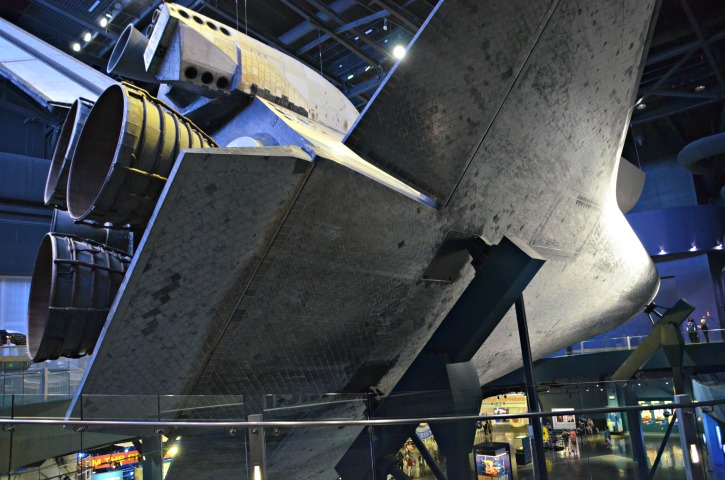 There are so many exhibits and activities included with admission to Kennedy Space Center. If you are looking to go deeper into the experience, there are other items that can be added to your day, such as Lunch with an Astronaut or more in-depth tours. If Jaxson had been older on this trip, I would have definitely considered adding some of these activities.

Have you visited Kennedy Space Center before? Which exhibit was your favorite?