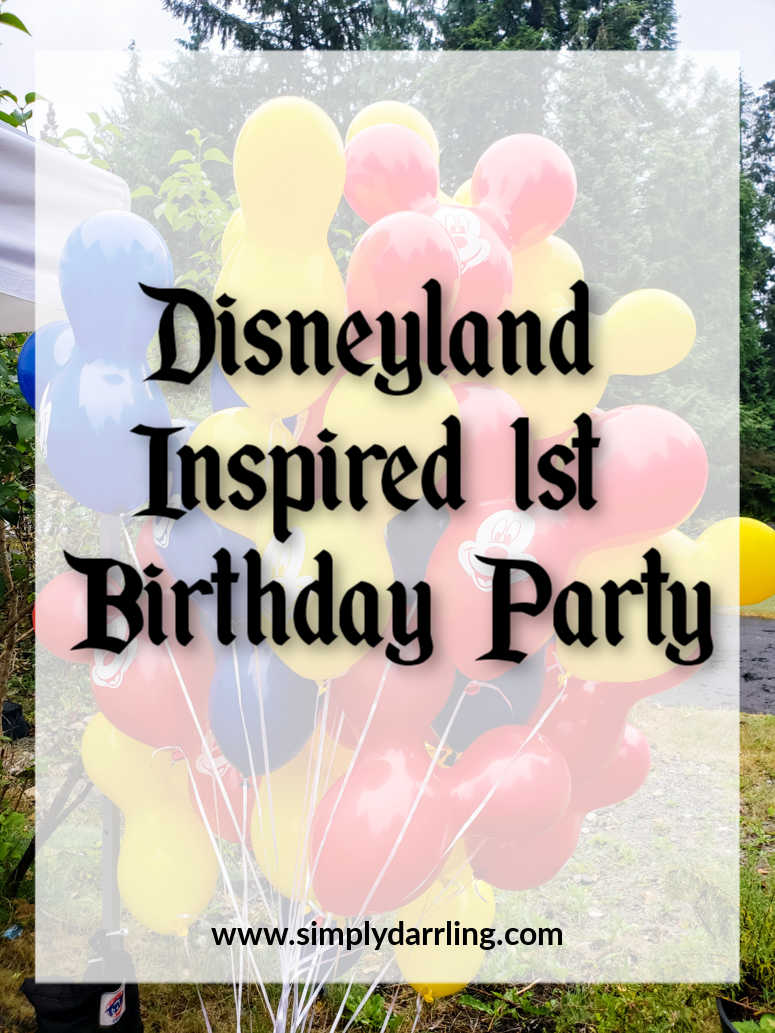 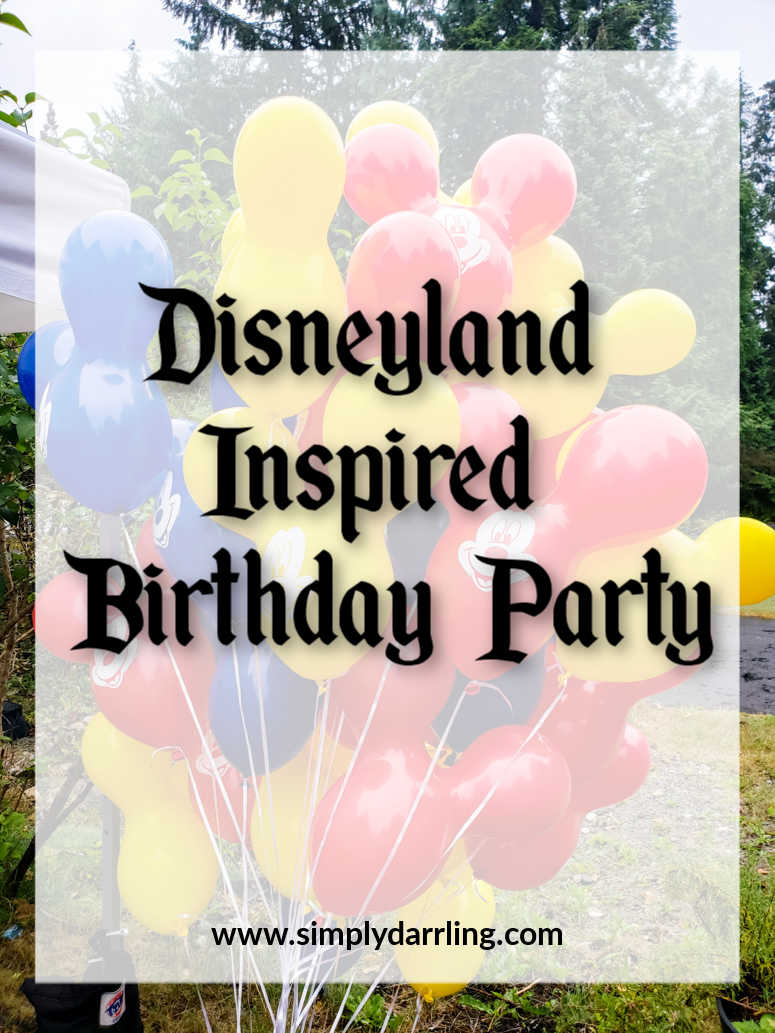 I started planning Emmett’s birthday party back in February when I decided that it was going to be Disneyland themed. At one point, I had even thought about making little themed “ride” areas in the backyard.

As we headed into quarantine, I was hoping that we’d be back to “normal” before his birthday, but the closer we got to June the more I realized that his birthday would have to be a drive-by party that was Disneyland inspired. 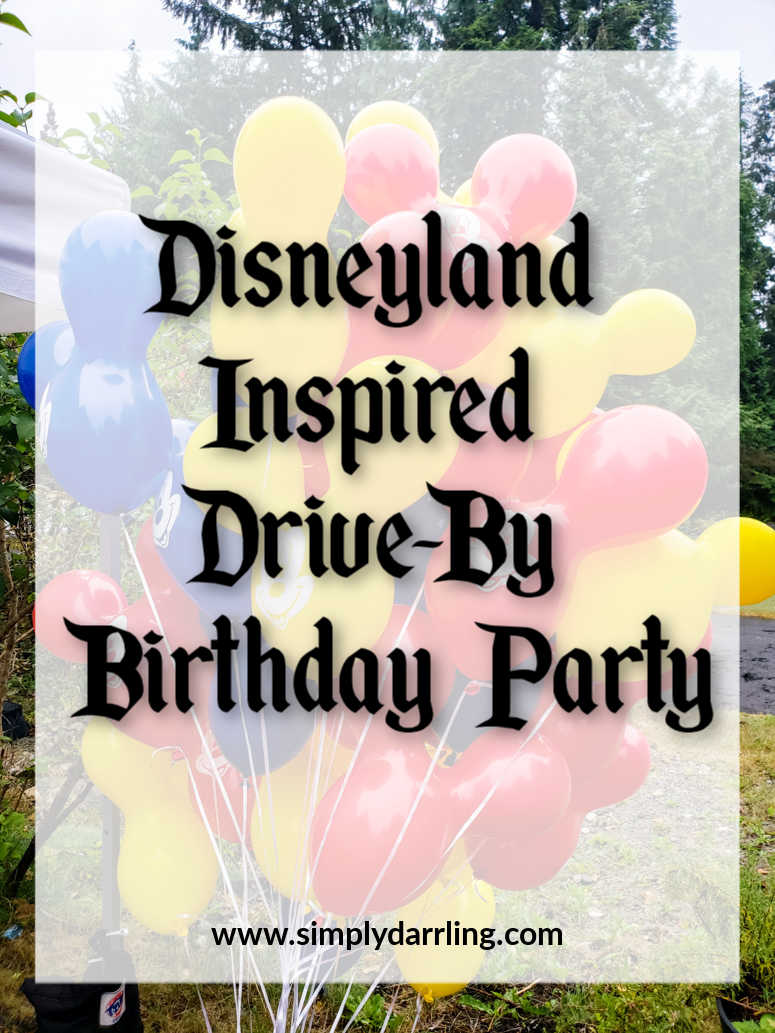 Fortunately, we have a GIANT driveway, so we were able to incorporate a few fun features into the party.

To keep the Disneyland theme, I focused on decor, party favors, and (individually packaged) food.

As we got closer to the date of the party, Seattle couldn’t decide if it was going to be 65 and raining, or 80 and shining sun. We decided to set up a couple pop-up tents that could serve as either rain or sun protection for the grab-and-go items.

I was pretty terrible about taking photos during the party, but I did manage to snag a few before people started showing up. 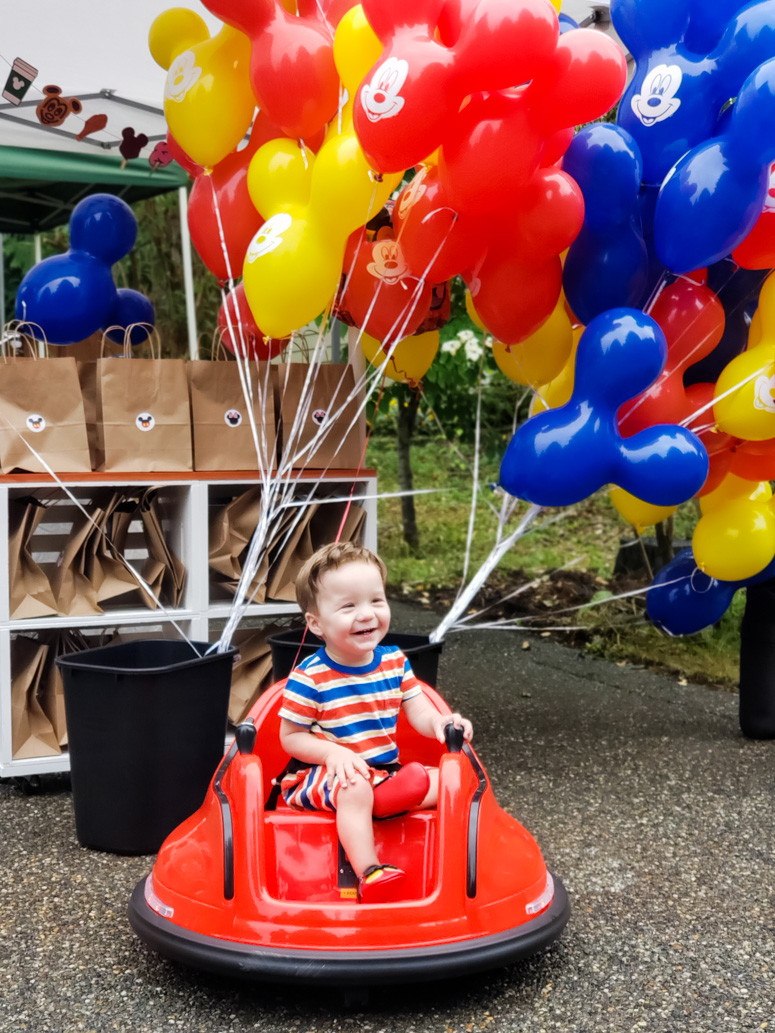 I focused on the type of food that would be found in the snack carts around Disneyland and California Adventure.

I will say that the Cotton Candy was more of an attempt rather than a success. I spent a couple hours trying to make fun bags of cotton candy, and ended up with 3 successful attempts. So needless to say, we didn’t have cotton candy for people to take with them. Had this been a “normal” party, I might have practiced and had the machine set up so it didn’t require being made in advance. 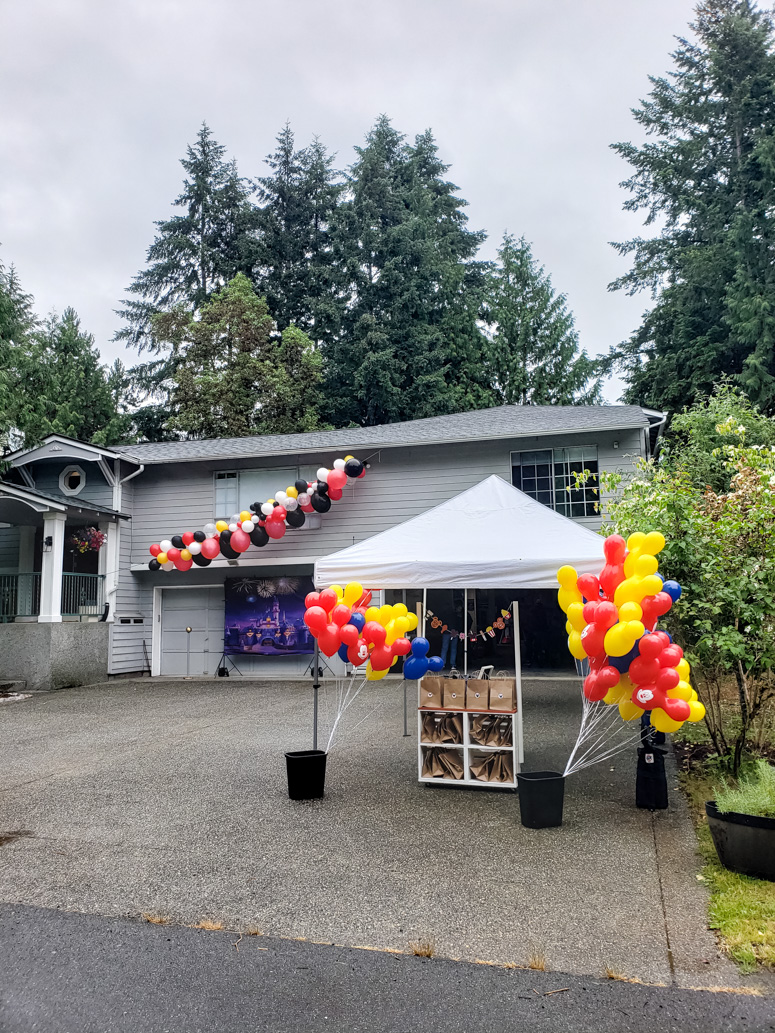 Other than the Dole Whip, the other items were purchased at Smart Foodservice (formerly known as Cash N Carry). I was also able to get the individual packaging there. I went with corn dog bites rather than full size and it was perfect grab-and-go size.

For the Dole Whip, I made it in batches and portioned it into 4oz containers before storing in the freezer. Small wooden spoons were a fun way to enjoy the Dole Whip. If you’re going to be making multiple batches of ice cream, or don’t want to always have a bowl in the freezer, an ice cream machine with a built-in compressor (such as this Whynter model) is ideal.

Originally, I was planning on doing a Mickey Waffle bar. I had purchased the legit waffle mix, the mini-Mickey head waffle maker (this one is similar, the one I have is no longer available), and had a whole plan of delicious toppings.

One of the Disneyland themed activities that I dreamed was a “selfie station” with the castle as a backdrop. It came with push-pins to tack it to the wall, but we ended up using a photography backdrop stand that I already had.

Right next to the Disneyland castle backdrop was a “fastpass scanner”. This was made with a 140mm fillable plastic ornament. I used vinyl to add the same shape as the Fastpass scanner, then spray painted it with gold (make sure to cut off the ornament hanger portion before you paint). 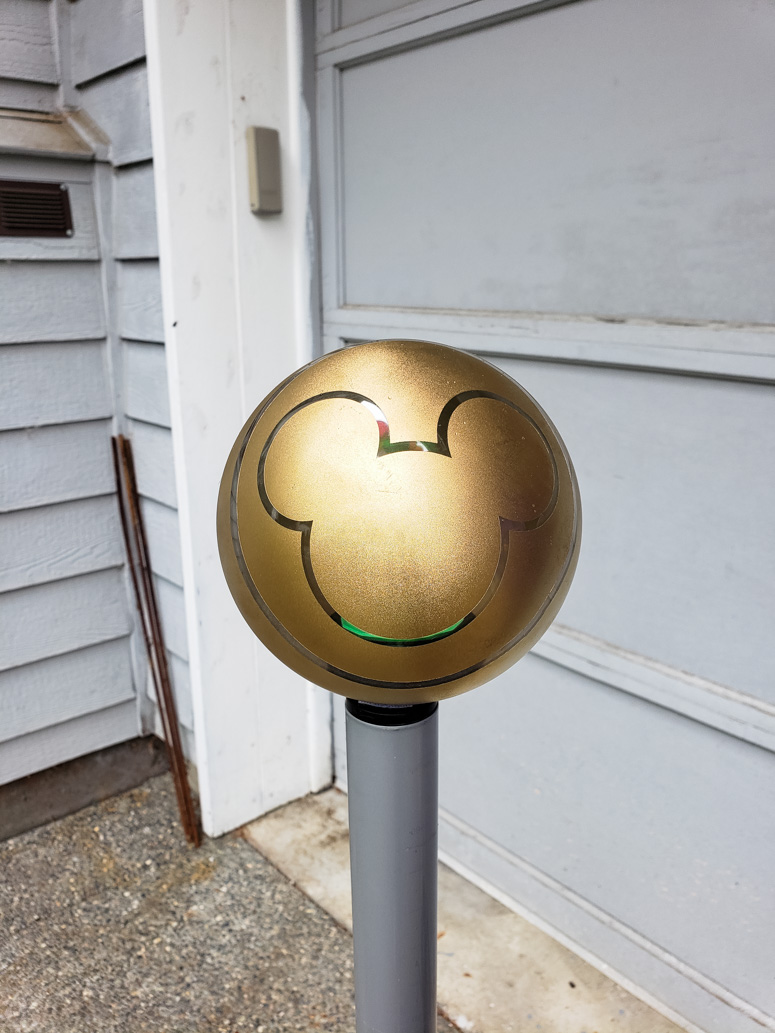 Because of the spherical shape, it can be hard to get the vinyl to lay flat onto the ornament. I ended up having to cut the vinyl and do some manual placement.

To get the “glow” I added a color changing LED puck light to the inside. It has a remote to turn it on/off and also change the color. If I was even more “extra”, and if these were normal times, it would have been fun to make guests faux tickets that they scan and then have a “Cast Member” flip it from blue to green (or red to mess with them).

This globe was then velcro-d onto an expanding IKEA leg that Brad had in the garage. A large tube, PVC pipe, or a 4×4 post would also work well. 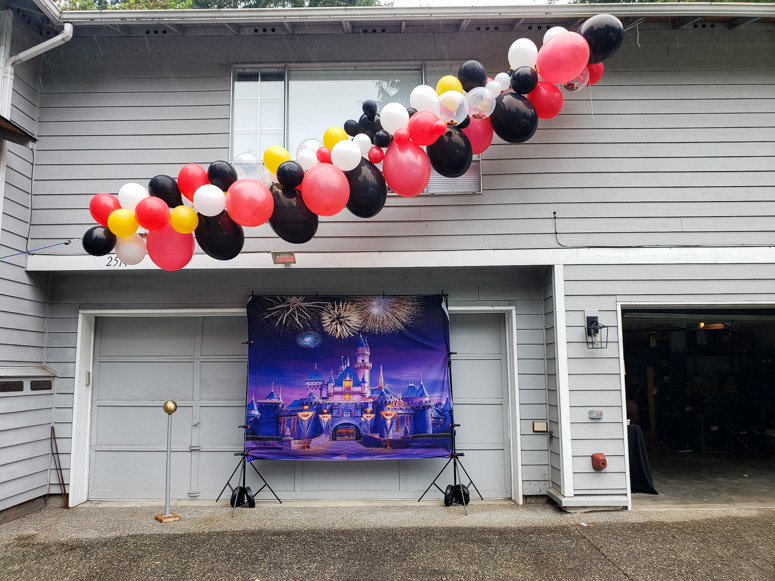 After some late night online shopping, I decided that a Mickey inspired balloon arch was necessary. This was decided without much foresight on where it would get hung, but after a few ideas, Brad had the idea to put it in the front of the house above the selfie station. An electric balloon pump was absolutely necessary for making this arch without passing out. It took about two hours to build, and we lost 4 balloons in the process.

(Can you spot the “Hidden Mickey” in the balloons?)

One last minute addition to the party was a “time capsule” for people to write wishes and predictions for Emmett to open on his 18th birthday. So far I’ve been good and haven’t read what people wrote for him. The sign and note cards were a printable that I bought from Etsy, then I used a gift box from Target to hold the notes. 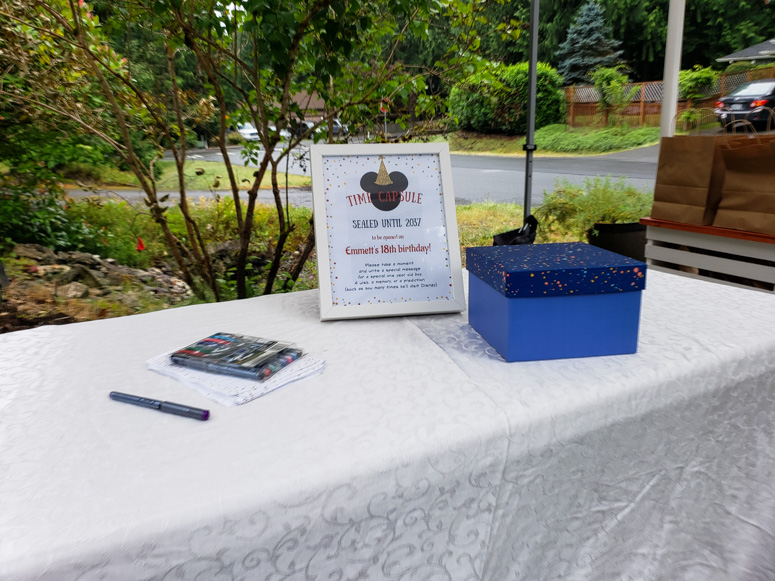 When I started planning this party back in February, one thing that I really wanted to incorporate were the iconic Mickey Mouse double balloons that are all around Disneyland. I searched far and wide to see if I could find a way to buy these balloons, but to no avail. I had plans to visit Disneyland when I was in LA in May and possibly deflate a few to take home, but when that trip was ultimately canceled those plans went out the window.

While they aren’t the double balloons, I did find some awesome Mickey Mouse head balloons. Some items that I read stated is that these are the same balloons that are inside the double balloons. I decided to make these balloons part of the decor and party favors. They do take some practice to actually fill because you have to do each ears and then the body, so make sure to have a few extras as practice balloons.

We filled the Mickey Mouse head balloons with helium, and they lasted about 2-3 hours before starting to deflate. If it wasn’t cold and rainy, they probably would have lasted a bit longer. We also added a small balloon weight to the bottom of each balloon to prevent them from flying away. 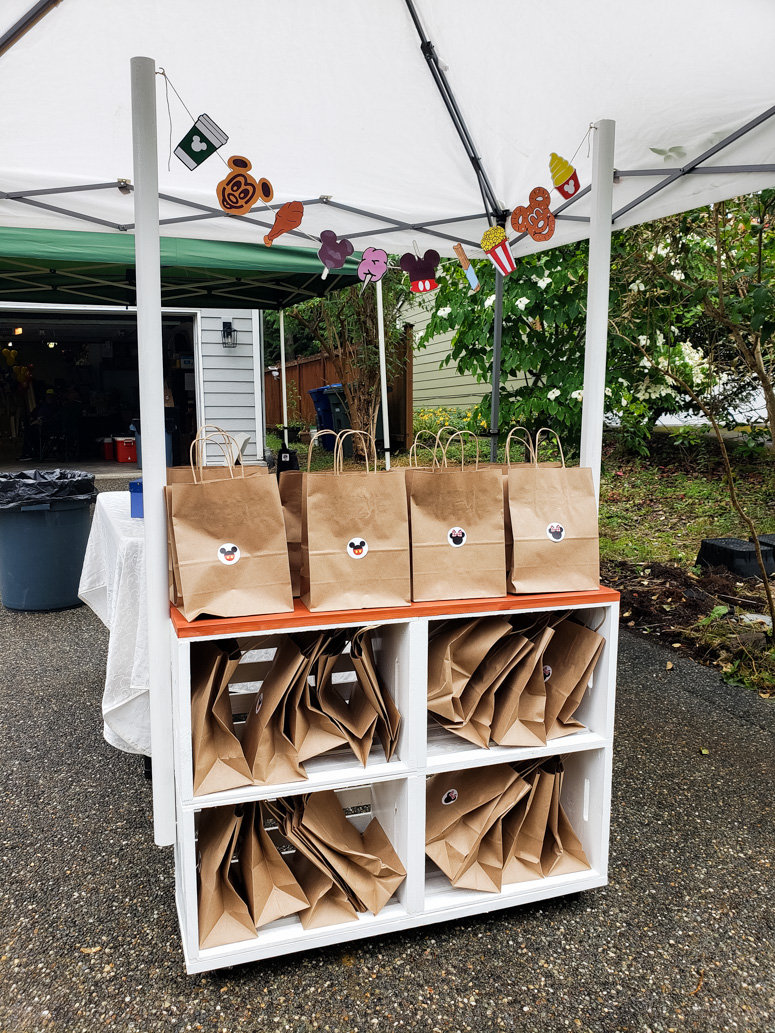 I bought the Disney pins as a large lot on ebay, and got lots of fun pins. If you are putting together a Disneyland Themed party when Social Distancing isn’t required, using these favors for a pin trading activity would be a fun aspect to the party.

These favor bags were set on a lemonade stand that Brad and I built. The lemonade stand was super easy to make, it took longer to paint than to actually build. I topped it off with a banner featuring iconic Disneyland snacks. 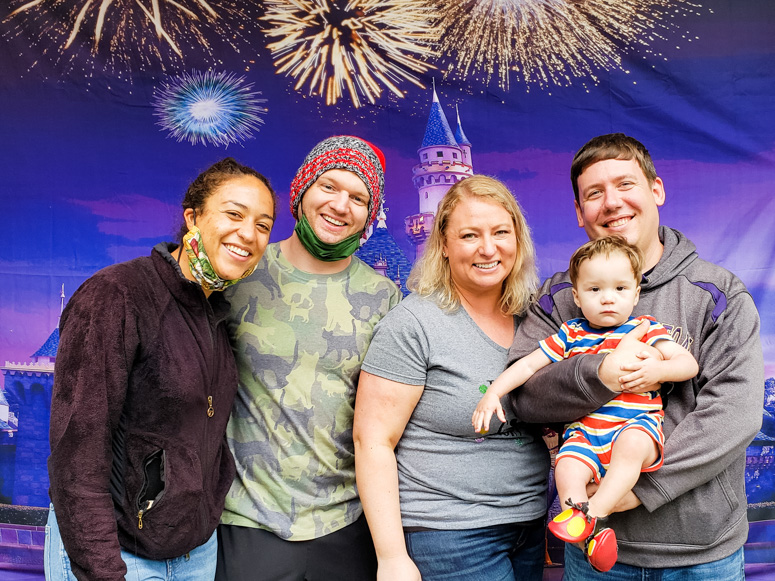 (Note: this is my brother and his girlfriend. Masks were worn for the duration of the party and people socially distanced to grab items and take selfies, but at the end we took this family photo. They have already been included in our “quarantine group” when our county moved to Phase Two).

While the party wasn’t what I had originally envisioned, it still turned out fabulous and we had lots of people drive-by to wish Emmett a happy birthday and grab some treats.