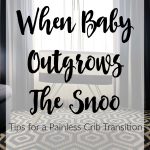 When researching the Snoo, one thing I noticed was people were concerned about transitioning to the crib once the Snoo was outgrown. Anneliese has successfully moved all of her naps and nighttime sleep to her crib, so I’m sharing what worked (and didn’t work) for us during the process.

I’ll start out by saying that Anneliese was *not* a fan of having her arms swaddled at her sides from the start. After a few nights, we moved to the snoo sacks that had open shoulders and added a Love To Dream underneath.

After allowing her to have her hands up she immediately loved the snoo.

Once she was out of the newborn sleeping 20 hours a day stage, she slept great at night, but only wanted to nap while being held. Every once in a while she’d take a nap in the snoo, but it wasn’t guaranteed.

Despite the fact she didn’t want to nap, she slept AMAZING at night. We were getting 5-6 hour stretches by about 5 weeks old and by 3-4 months she was sleeping 10-12 hours without waking us up.

Most nights the snoo would have to kick into soothe mode once or twice, but I also had the sensitivity turned up pretty high so it would kick on easily.

When she was five months old we started discussing the transition into her crib. She already had access to her arms (we removed the love to dream swaddle around 3 months) so that step of the weaning process was done.

The recommendations that I’ve seen are to wean nights before naps, but we actually did the opposite. Around five and half months old miracles happened – she napped! And in her crib! I don’t remember what prompted me to try her nap in the crib, but with a Baby Merlin Magic Sleep Suit, White Noise, and some rocking to sleep while drinking a bottle, it happened!

One night I decided to try her in the crib cold turkey. It did not go well and she was back in the snoo within a couple hours of going to bed. I was a bit concerned that it would be a difficult process, but after doing an actual wean process it went well. (Side note: I also did this while she was working on getting her third tooth to break through so that added to the fussiness the first night).

The snoo app features a weaning mode which stops the constant movement, but keeps the white noise, and soothing movement if needed. We put the snoo into weaning mode, and a few nights later set the motion limiter so it would only hit level two of the soothing mode. At that time, I also changed the sensitivity to medium so it would take a bit more noise from her before starting to soothe.

We kept her in this weaning mode for about a week before trying again with the crib. This time it worked and she slept all the way until morning. She is still sleeping in the Baby Merlin Magic Sleep Suit, and I’d like to transition her to a standard sleep sack since we have a couple of trips coming up and those things are bulky; however, she is now working on her fourth tooth so I’m waiting until that fussiness is over before attempting the change.

Overall, weaning from the snoo wasn’t too bad, if your baby’s arms have been swaddled tightly with the sleep sack then I’d add a couple weeks onto the plan for arm adjustment.