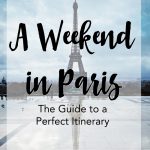 Brad and I spent the first weekend of December in Paris. This was our Christmas gift to each other, and had such an amazing time (even if it was only for a weekend). Once we booked the trip, I went into full on planning mode so that I could figure out how to make the most of our short time in Paris. Even though we only had a weekend in Paris, I created a perfect itinerary for us which focused around our “must-do” activities, and utilized the close proximity of many attractions. 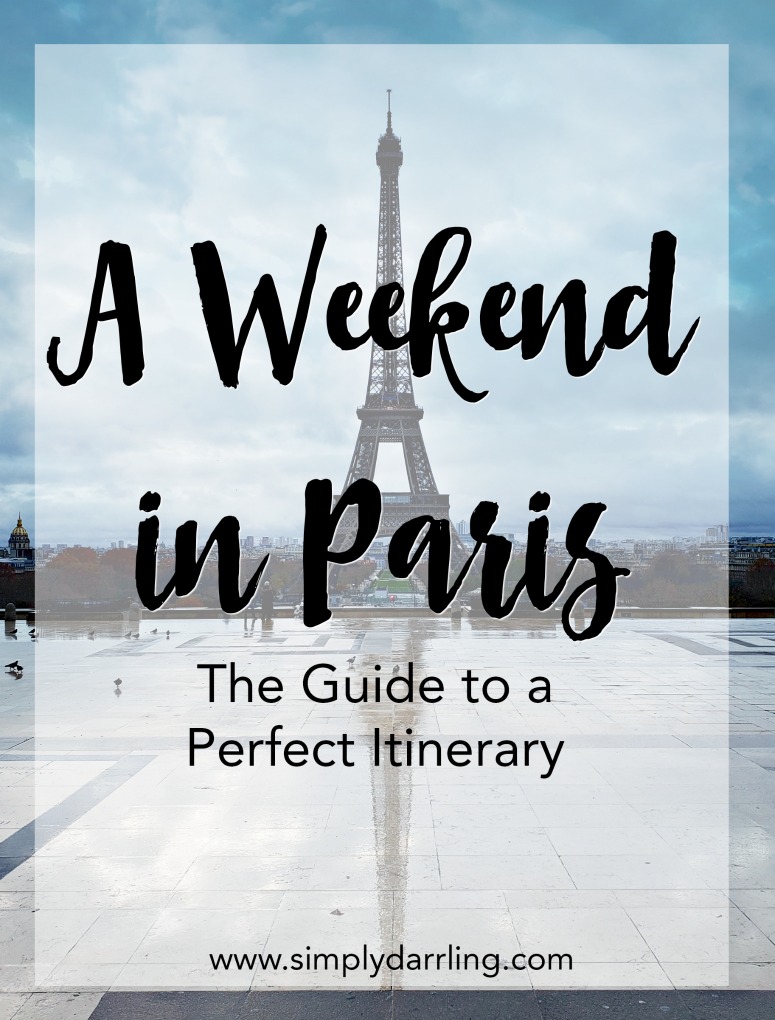 Flying from Seattle, we had about a 10 hour flight. We had a noon flight out of Sea-Tac which put us into Paris about 7am. This overnight flight allowed us to basically have a full day when we landed. The one downside of this flight was that we weren’t really tired when we were on the flight so it was hard to take a decent nap on the flight over.

Delta has an awesome seat-back entertainment system so Brad and I had plenty of options for passing the time on the flight. Each of us watched a couple movies, and a few TV show episodes while trying to catch some sleep between them. Overall, I think we each got a couple hours of sleep over the course of the flight. 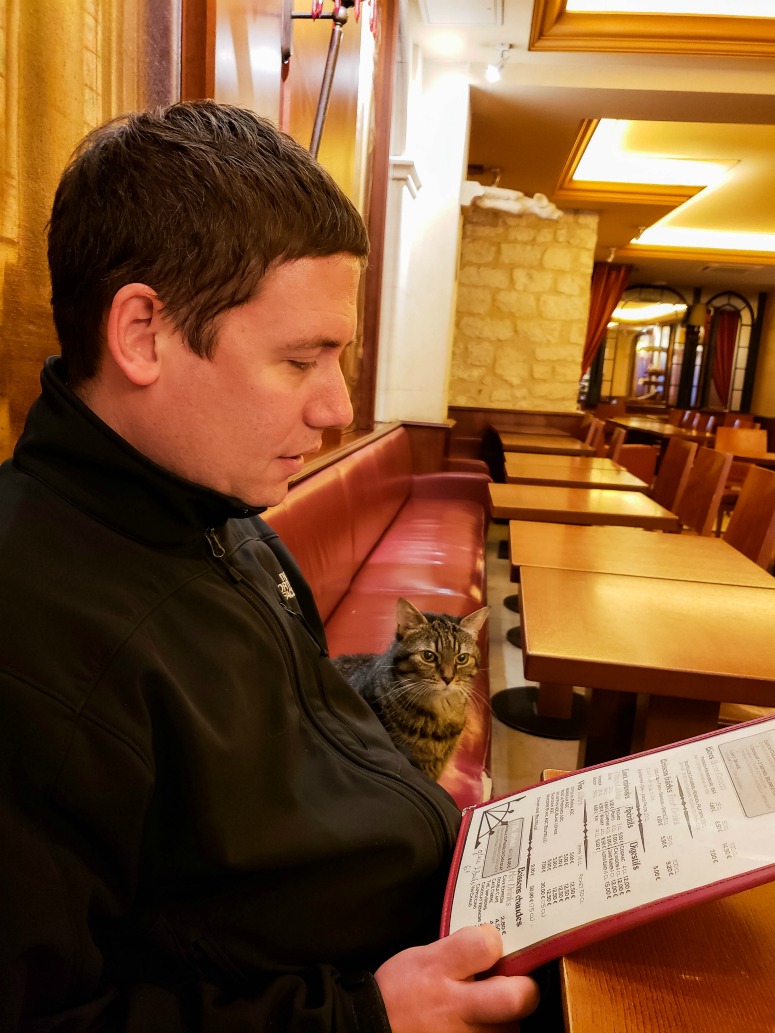 Once we landed, we headed straight to our hotel to drop bags, change clothes, and attempt to somewhat freshen up. We knew that our room wouldn’t be ready this early, but it was nice to at least drop the bags and get out of  plane clothes. We stayed at the Hyatt Regency Paris Etoile which wasn’t exactly central to everything, but it was still close to quite a bit, and the views from our room were absolutely spectacular.

Our plan for the day was to check out Notre Dame and The Louve. Originally, I thought that we would take full advantage of public transportation while in Paris; however, as I thought it through a bit more, we decided to do some of the longer trips via Uber to save time or risk of getting lost. 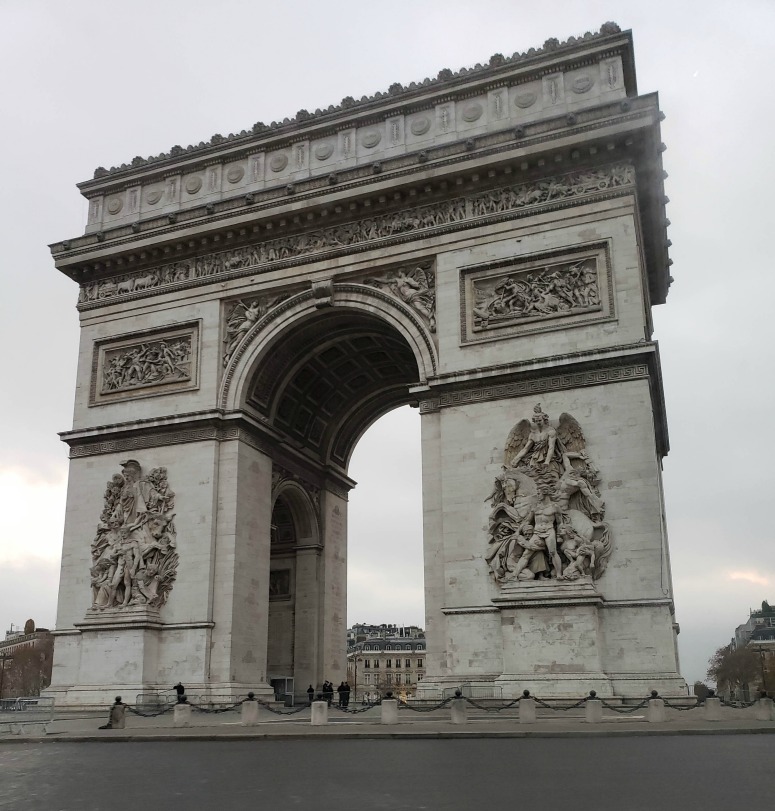 This first Uber ride of the morning was when we started to realize there might be something else going on in Paris that day. As we drove past the Arc de Triomphe, some of the streets off of the roundabout were already closed. We had no idea how crazy the day would get.

Once we arrived at Notre Dame, I saw people signing up for tickets. Through my research, I knew that it was free to tour, so I just figured that it was signing up to control the flow of people. As we were let in and we climbed the first set of spiral staircases, I realized I was wrong. Turns out we had gotten in the line to climb the tower. The views were spectacular; however, my quads were on fire by the time we got to the top. 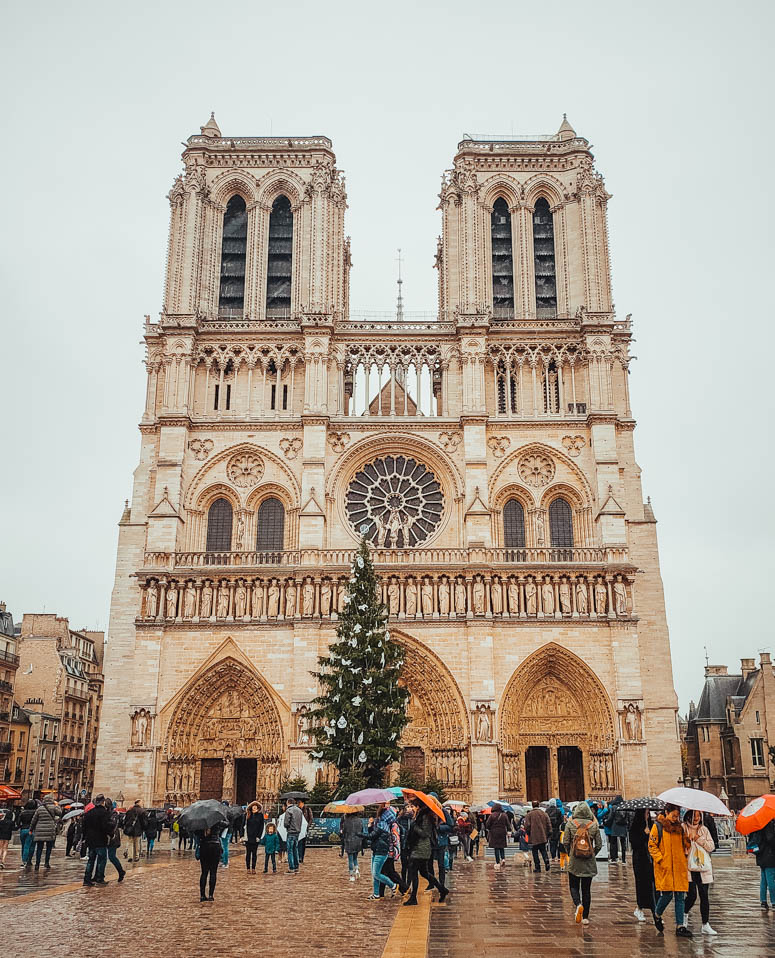 After taking in the views from tower, we headed inside to see the rest of the church. The church is absolutely stunning, especially all the stained glass windows. It looked like there was a baptism going on while we were there as well (the church is huge and we couldn’t really see what was going on).

After Notre Dame we started walking towards the Louve. Fortunately, with our Verizon service, we were able to use our phones as if we were back at home so we could follow Google Maps as we walked. 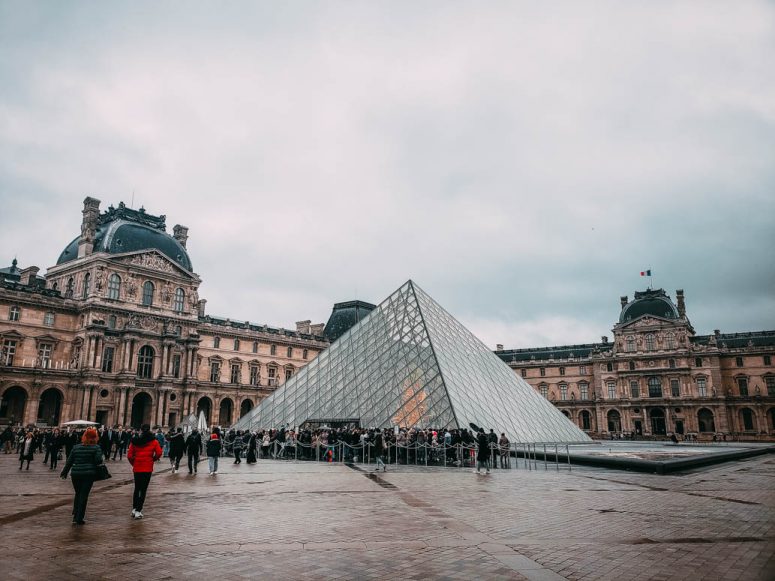 When we arrived at the Pyramid, the line was huge. We almost skipped going inside because we didn’t want to stand in the line (especially since it was a bit blustery and sprinkling). Then I remembered that there were multiple entrances, so we went to the entrance at the Carrousel Arc de Triomphe (pictured on Google Map below).

We headed underground for the entrance, and we were able to get our tickets in just a few minutes. One mistake we made was that we didn’t grab a map or make a plan on what we wanted to do once inside (other than see the Mona Lisa). The Louve is HUGE, so without a plan we ended up just kinda wandering. We did eventually find the Mona Lisa, but only checked out a few exhibits before heading to our next adventure. 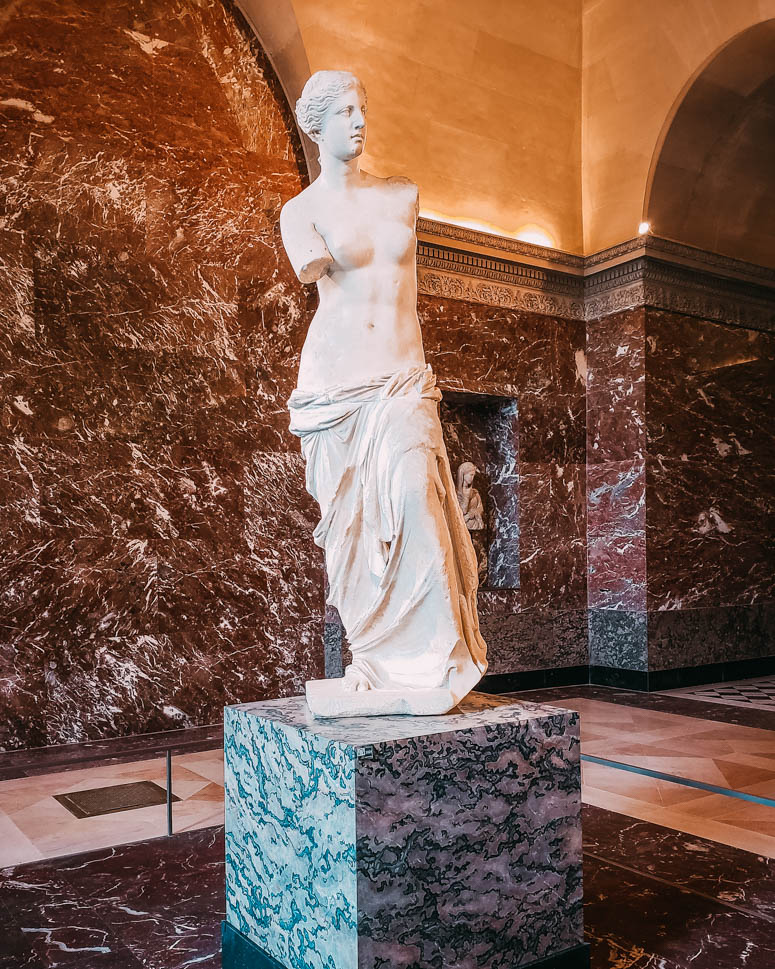 During my research, I found out that there was a Christmas market in the garden just west of the Louve so it was on my list of things to see. We walked through this Christmas market on our way to Angelina’s. I had multiple people tell me that I needed to try the hot chocolate, and I was glad that I did. It is more of a sipping chocolate, so it is super rich, but absolutely delicious.

While having a late lunch at Angelina’s, we saw waves of “Yellow Vest” protesters walking down the street. We were starting to put information together and realizing that the night was going to be a bit crazier than anticipated. I started checking twitter and saw how crazy it was near the Arc, and we were constantly hearing sirens in the not so far distance.

We hit a couple local shops then called an Uber to take us back to the hotel. We were a couple miles away from our hotel, and had to get to the opposite side of the protests. This Uber ride was a bit crazy. Our driver kept having to turn around due to closed roads, fight traffic, and eventually was able to get far enough out of the path to go around the protests. During this drive, we saw crowds being tear gassed as the police tried to disperse the protesters.

Once we got back to our hotel, we finished checking in and saw our awesome room. We were up on the 31st floor and had a spectacular view of the Eiffel Tower and Arc de Triomphe. 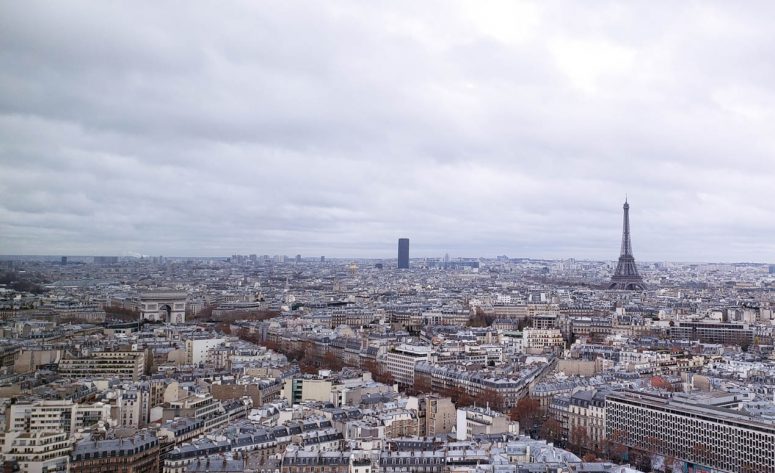 From our room, we watched the smoke expand out the roads from the Arc, and slowly turn from a dark black smoke to white as the fire was put out. At this point, we really could tell how widespread the protests were throughout the city. 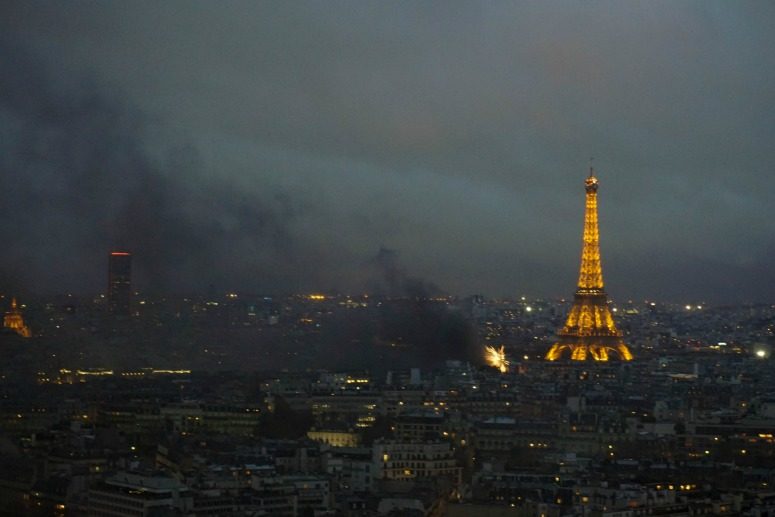 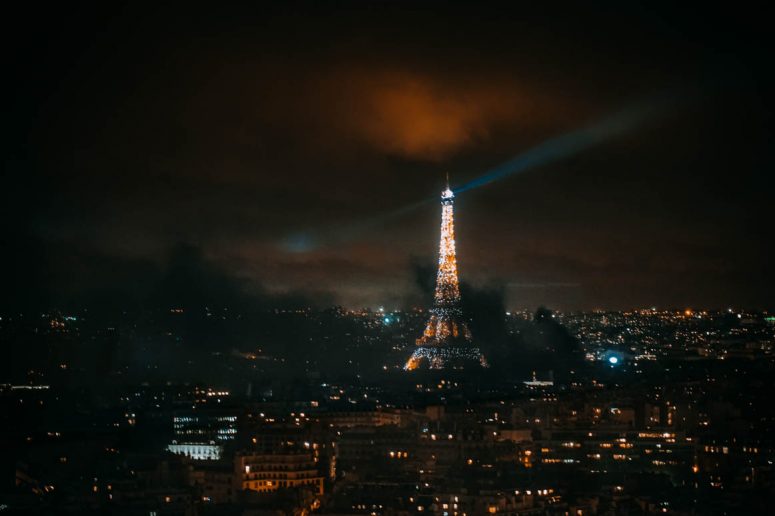 We made it to about 8pm before passing out from exhaustion. Sunday morning we were up bright and early (thanks jet-lag) to start day two of the adventures.

After breakfast, our first adventure of the day was a photo shoot with Leo from Flytographer. This was such a fun time and we got some amazing photographs at Trocadero with the Eiffel Tower in the backdrop. I’ll be sharing all about this later, but for now, I’ll just say how awesome it was, and that I absolutely LOVE my photographs. 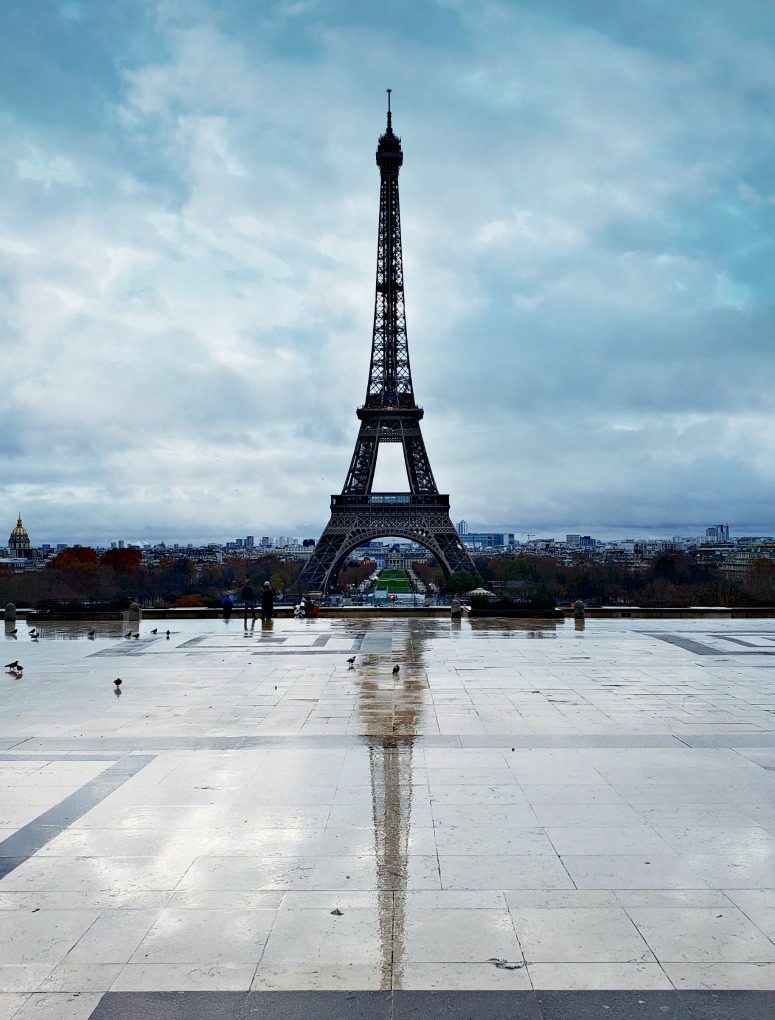 We had originally planned on checking out the view from the Arc de Triomphe on Sunday; however, it was closed to the public since it had been defaced the night before. Instead, we walked down Champs-Elysees and peeked in all the high end shops. This is also when we really saw all the damage from the previous night. We saw smashed windows, charred cars, and ashes of motorbikes. 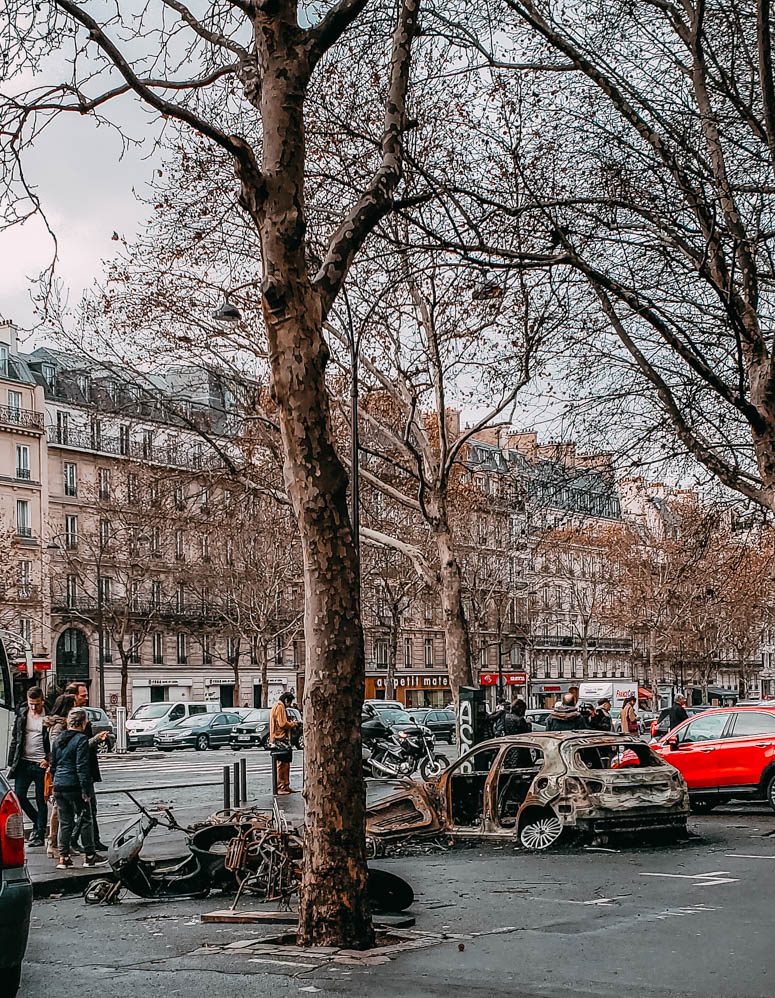 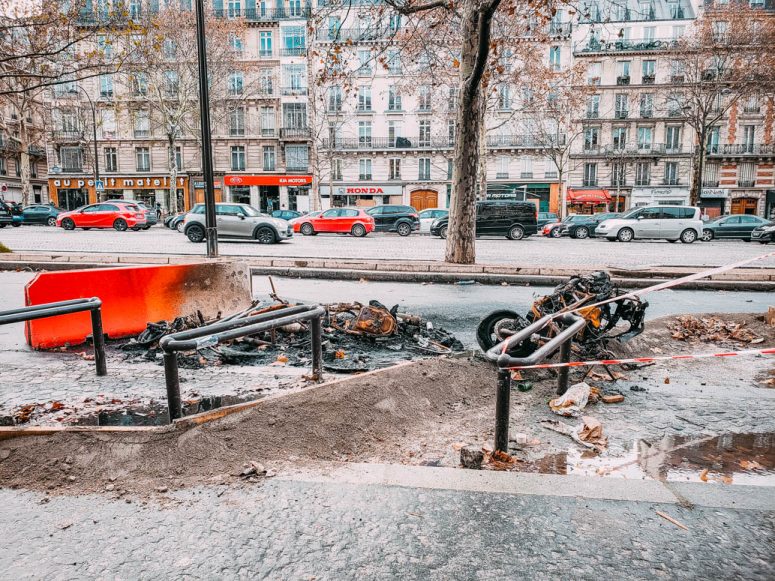 Our afternoon plans included a river cruise along the Seine. It was fun to see a different view of the places we had walked the previous day. The river cruise runs multiple times an hour, and is an hour long cruise. The cruise starts from the base of the Eiffel Tower and heads towards Notre Dame, pointing out the various sights and museums along the way. It is amazing to think how old many of the buildings and bridges are in the city and how much history they have survived.

We thought about going up the Eiffel Tower; however, with our limited time, we opted to just walk up to it and appreciate the view from our hotel room. Pre-buying tickets are definitely the way to go because you can at least skip part of the line; however, you still have to wait in line to go up the elevators. 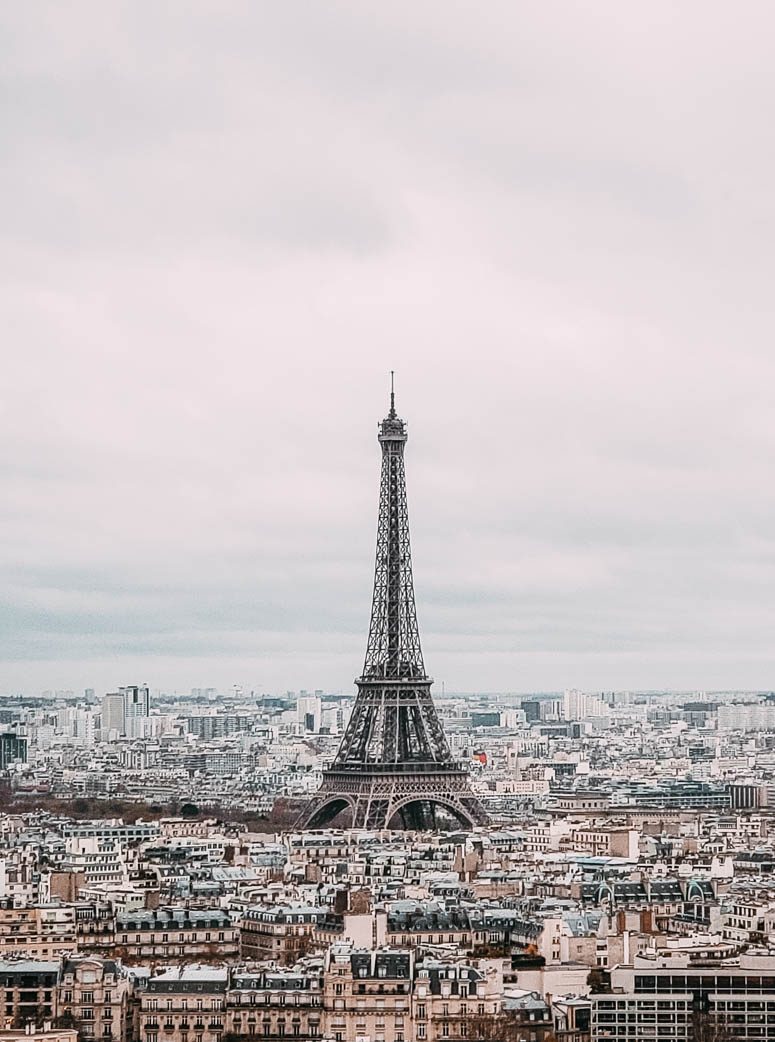 After circling the base of the Eiffel Tower, it was time to find a late lunch. We simply stopped at a cafe and enjoyed a delicious meal before meandering our way back to the hotel. We also made a stop into Monoprix (I’ve heard it referred to as the Target of Paris) to pick up a few souvenirs. We also brought back a few bottles of French wine, so I was glad that I packed my Wine Skins for the trip. 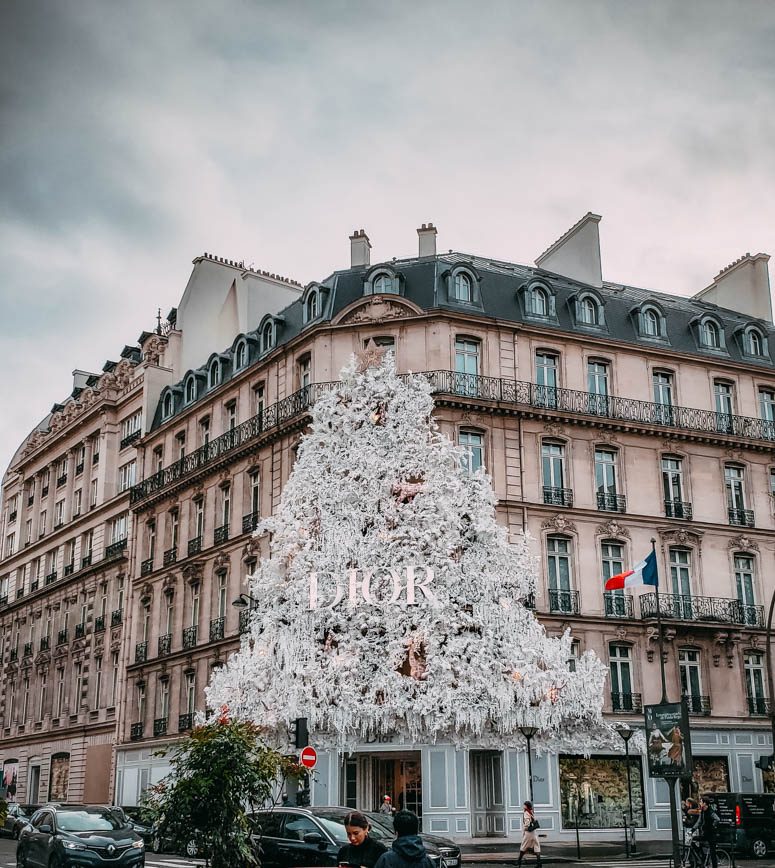 Monday, we had a 2PM flight home, if we had woken up as early as we did Sunday we probably could have squeezed in a bit of shopping, but Brad actually managed to sleep-in so we finished packing our suitcases and headed straight to the airport.

We weren’t sure how long passport control and security was going to take so we wanted to make sure to have enough time. It definitely took a bit longer than simply going through TSA at Sea-Tac; but it wasn’t too bad. There was still plenty of time to window shop the designer stores in the concourse, and grab a bite to eat before boarding the plane.

If you are planning a trip to Paris and only have the weekend to tour the city, I recommend picking one or two major things to do each day (depending how long you plan on spending at a museum). Some of the magic of Paris was simply walking around the city and taking in the atmosphere. It was probably a crazy idea to fly to Paris for a weekend; however, it was totally worth it.